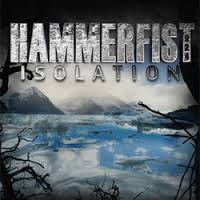 Hammerfist from Orange County, CA, might never become famous for their album covers. They might though, for their top tier hardcore, since that is pretty awesome material. This is their latest record Isolation.

So, straight up hardcore, don’t be fooled by the name and some strange titles, these are not some new NSBM band. If anything, they sound like a tuned up version of Agnostic Front and Integrity.

‘Skin Change’ lands in an energetic blur of instrumental mayhem. Brutal screams followed by pounding drums and high speed agression ensue. ‘Ultima Thule’ follows in those footsteps, high paced and energetic. Including the slowing down to get some dancing going.

On ‘Ilusio’ the band tones down a bit, takes a slower pace and managers to reach a different vibe. The power and raw emotion is there, but also a melodic streak. The same thing goes for ‘Forest Of The Death’, which has a shattering power to it. Hard hitting and heavy the song pounds onwards. ‘Carry The Weight’ closes of the five tracks with the expected foce of brutality.