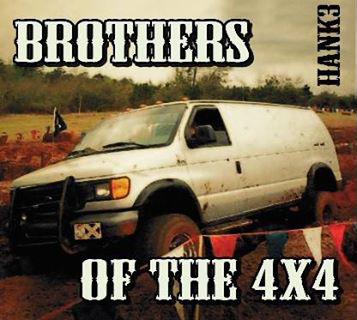 Hank 3 is on blazing form on his umptieth recording in just a few years. Never was the sound so ‘down home’ and it’s the first time since ‘Risin’ Outlaw’ that I can sit through the entire record without any complaints.

The music supports the story well throughout the 16 tracks of outlaw country grass. With his raspy, distorted voice that balances somewhere between Joe Cannonball Lewis and Jim Eanes, Hank sings about things that the common man contemplates about on his porch after a hard day of work: his car (“Brothers Of The 4×4”), relationships (the beautiful “Farthest Away”), killing animals (“Outdoor Plan”), his job (the moving “Ain’t Broken Down”) and pain from the past (“Deep Scars”). Hank keeps his politics far away from his music.

A contender for country record of the year, just like his sister Holly Williams’ masterpiece ‘The Highway’ released earlier this year. The force is strong in this family. The family tradition is continued. Can I get a ‘Hell Yeah’!

Together with ‘Brothers of the 4×4’, Shelton Hank Williams released a punk album called ‘A Fiendish Threat’. Fuzzy garage pop punk that even hipsters won’t touch cause it sounds like it was recorded with a potato. Don’t get me wrong. I love some lo-fi garage stompers but this is ridiculous.