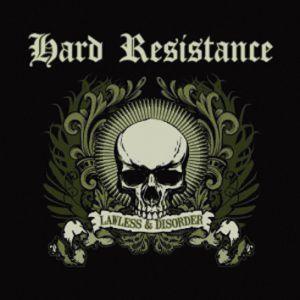 You must be completly blind or deaf if you don’t know that Onno Cro-Mag and Roger Miret have founded a new label. Their first release promisses a bright future. Hard Resistance is back and harder than ever.

If you have been around in the nineties you must have heard the briliant ‘I wanna see a fucking tornado all around the dancefloor NOW’ oneliner. Whether it was out of deep respect or riducule the most notorious band made it’s way into the brains of hardcorekids around Europe. Somehow the Eurocorescene exploded in the nineties and fell victim of it’s own succes. Yes, a lot of kids were raised by the Lost and Found catalogues and yes they bought every album they could get their hands on. And yes, a year later they claimed with dry eyes that they never were into eurocore. It always amazed me that with this movement the quality of the bands was overlooked. Hard Resistance was, and again is, a band with really cool people that were around way before most of their fans knew there was something like hardcore.

Lawless & Disorder offers a complete new experience. It’s faster, meaner and more pissed off and it rages on like none of their albums did before. In a way this album reminds me of Panzer Division Marduk. Simply because from start to finish the tempo is high and mercyless. The fact that the album never gets boring, and has more than enough variety to offer underlines my statement that this band is actually way better than most people think. On the other hand it’s hard to pick a ‘best’ song because the strength of this record lies in listening it in one go.

Lyrically the band seems to be more pissed off than ever. Their crusade against greed, injustice and other wrong things in the world seems more direct and to the point than ever. All things considered I am glad that they are back and to be honest, if there are still people out there that want to be stuck in the past and want to scream eurocore. Let them. This is a pure hardcore album that should get at least a spin by everyone that claims to be into hardcore.