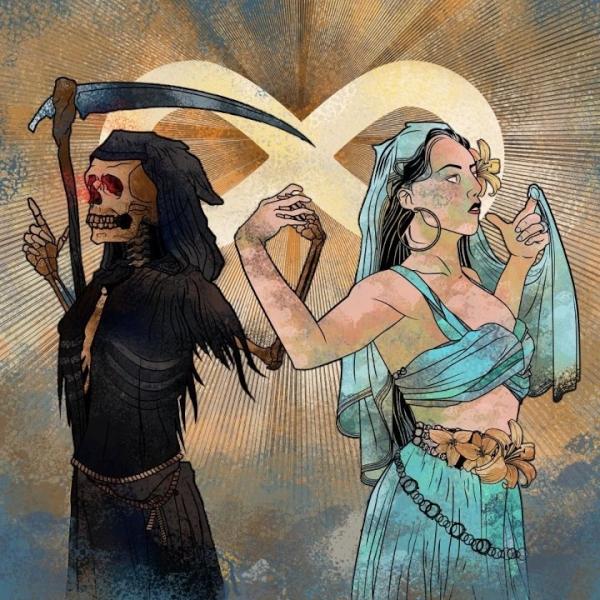 Time Is Punishment is Hardside’s debut record and is put out by 6131 Records. Hardside certainly is a band that can drop some names; they share members with Deathwish Inc. band Bitter End, they got Terror & Trapped Under Ice producer Paul Miner to record and mix and their album artwork was done by Linas Garsys, who also did art for Ceremony, AFI & American Nightmare. Hardside started as a side-project but has become a serious and touring band, having brought out a 7” and playing across the USA and Europe. Sonically Hardside falls in line with the bands they name-drop, Hardside plays NYHC the Reaper Records way with a sound alike to Terror, Trapped Under Ice and Naysayer. You know what to expect: low, distorted and palm-muted guitar parts, heavy drums and some moshable breakdowns. For the most part this record sounds exactly like that, I’ll just go over some of my other observations.

I’d like to start with saying that I really liked the production. Bringing a big name in sometimes results in a over-polished studio sound that takes away the raw feel of the music, a utterly regrettable thing in my opinion. Luckily Hardside and Paul Miner managed to give the record a clean, well-produced sound without taking away the rawer NYHC sound. I thought the drums were tracked nicely, they sound pummeling and big without straying too far from their original live sound. Guitars and bass are sounding good too, a thick distortion and a driving, well-audible bass. The instrumentation sounded balanced and clear. The vocals were a thing I didn’t like at all, it might’ve been the beatdown-like grunting that put me off, but it could also be the hollow-sounding vocal production. I just couldn’t get into them.

Now on to the record itself. I’m afraid that I can’t be as positive about the music itself, sadly I wasn’t impressed. Don’t get me wrong, I actually liked quite some of the latest catchy NYHC records (Big Kiss Goodnight, Keepers Of The Faith), but this record just leaves no mark. Two really standout points (in a negative way) were the lack of variation in the songs and the weak and strange vocals.

I can be pretty short about the lack of variation in the music, I know that most of these bands play a mid-tempo focussed kind of hardcore, but this is just too much for me. With the exception of parts of two songs every single song plays in a mid-tempo chug, it just gets really boring after 11 tracks. I would’ve appreciated some variation, maybe some faster/shorter songs or some experimental mellow or instrumental stuff.

The vocals on this record are a strange thing. As I mentioned before, the vocals sounded like they came straight from a German beatdown record or maybe even a Parkway Drive record, they just feel off. Sadly I must say that the lyrics or the presentation of them could not grasp me at all. The angry, ad hominem lyrics get bland after a while and the monotone grunting couldn’t get me excited either. I feel that bands like this really need some good but simple lyrics and above all, a strong frontman. This band just misses the strong, personal vocal performance that frontmen like Justice Tripp and Scott Vogel bring to the table. The vocals on this record feel hurried or unpersonal. It’s just something you have or don’t, I suppose.

The thing that I thought was the strangest were the clean vocals in the chorusses. I was really surprised when I heard a clean voice delivering a bridge on the first song, you don’t hear that a lot with this kind of hardcore. I must say that I got a bit irritated when the Rise Records-like clean vocals came back for almost every song of the A-side of this record. It just feels like this band is trying to force a form of catchy-ness on this record, an attempt that I don’t think went anywhere, none of the hooks could really get me. Again, this is a thing that can be done okay in moderation, think of the Pantera-like parts on Big Kiss Goodnight, but this really feels like a hit and a miss, sorry.

I can only say that this record really lacks on multiple parts. The sound may be good but big parts of the music feel empty or bland. Not a single hook got stuck in my head and I didn’t find myself fighting the urge to mosh or bang my head once. I’m really missing some solo’s, good vocals, some originality. I just feel that this record was made to play in on the popularity of a certain style rather than bringing some quality tracks to the people.

Of course that’s all just my humble opinion, if the band just wants to bring out some fun jams and tour a lot, two things they managed to do with some success thus far, I can’t deny them that right.

Just to end this: I thought that this record wasn’t an impressing effort, simple as that.

If you’re into Terror, Trapped Under Ice, Hundreth and those kind of bands I suggest you give it a spin. Otherwise, I would just leave this one be, I won’t be listening to this one again either.