Hatebreed – The Divinity Of Purpose 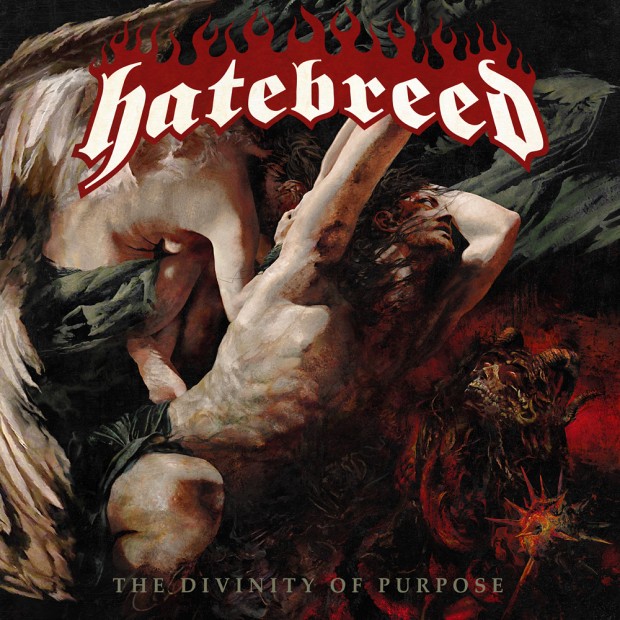 I think almost everyone in the hardcore scene knows what a Hatebreed album ‘should’ sound like. No matter how old you are, or which bands got you into the scene, I’d imagine almost everybody has been exposed to the bands particular style of audible brutality at one time or another. Whether you’re an European metal head, an American scene kid, or just one of those jaded old blokes at the back still clutching that Victory records mail order catalog circa 1997 close to your chest, a lot of people have a certain expectation of what a Hatebreed album is going to sound like.

Visually, the album looks great. Eliran Kantor’s renaissance style artwork looks fantastic, although there is a noticeable ‘Christian metalcore’ theme in there (this was cleared up by Jasta in my interview with him though), but, the good news is, they haven’t messed with the musical formula too much. It’s clear from opening track ‘Put It To The Torch’ that Hatebreed’s low end chugging break downs and furious pace have remained as an ever present, along with Jasta’s barking vocals. I know a lot of people who have lamented Jasta’s tendency to fill Hatebreed records with his raging, but unfortunately for them there’s to be no respite on The Divinity Of Purpose as Jamey growls his way through the first half of the album without many points for the listener to just appreciate the crushing riffs. Hatebreed’s previous self titled effort had moved distinctly into the metal side of the fusion of metal and hardcore that really made them famous, but The Divinity Of Purpose sees a welcome return to the sound of ‘Supremacy’.

Now don’t get me wrong, this record is neither the almost genre defining metalcore perfected on ‘Supremacy’, nor is it the pure rage channeled on Hatebreed’s Victory releases, but it’s still a damn good slice of ‘metalized’ (if you’re thinking ‘is that even a word?’, the Microsoft Corporation says it is so fuck you) hardcore, complete with the sort of chunky breakdowns that make you want to perform feats of manual labour. Guitarists Frank Novinec and Wayne Lozinak have done a good job of retaining the necessary metal elements whilst returning to that classic no frills formula that is the crux of Hatebreed.
Tracks such as ‘Honor Never Dies’ and ‘Indivisible’ feature the melodic leads and sing along choruses retained from the self titled, while others such as ‘Time To Murder It’ assault the listener with the kind of chugging down tempo breakdowns sure to have blood spilled at many an Eastern European metal festival this summer.

Overall, this record does exactly what it says on the tin. Sure, there’s some cheesy bits, and it’s not exactly complex, but you were probably in the wrong place if you were looking for some exercise in progression anyway. This record is big sounding, no frills, angry metalcore, and I’m sure Hatebreed fans wouldn’t have it any other way.