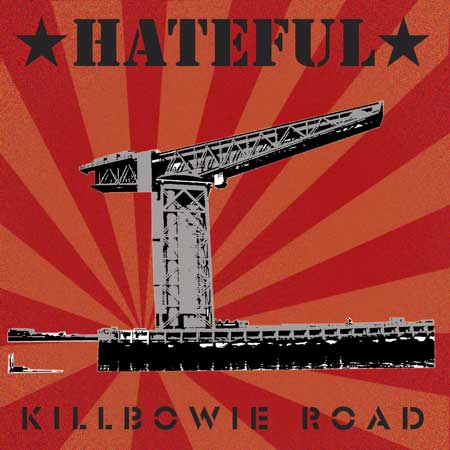 The older I get, the more pissed off I get. I like it when other people that get older stay in the scene. It isn’t sad or whatever. We are the first generation that will have veterans in the ‘scene’. However if you call your band Hateful I expect you to be pissed off and I want your music to be brutal as hell. Don’t get me wrong, I know good names for a band are scarce. But hey, at least live up to the name.

Now this Scottish outfit comes from a whole different angle than most Rebellion bands and for the sake of variation this might be a good choice. With bands like the Clash and The Ruts as a starting point you can say this is a more mellow band than bands like Razorblade and The Bruiseheads. That shouldn’t be a problem at all. However most bands compensate the lack of aggression and brutality with an urgency and drive. I miss that over here. What’s even worse is that the songs aren’t good or great enough to stick around in your brain for days.

This could have been the result of high expectations and a prejudice so I put the album away for a few days so I could listen to it again with an open mind. And again I found the overall album to be lacking in most fronts. Now don’t get me wrong. I believe these guys are sincere and know far more about punk than I do. However, I somehow have problems with the lack of energy and again the songs lack catchyness or whatever. So even from a different angle this isn’t a classic or an album that makes you want to hear more. While the other Rebellion releases showed me there was more than enough music for me to discover Hateful makes me long for the ‘originals’.

Now don’t get me wrong. The band isn’t as bad as I say. They have made some decent songs that do what they have to do. They sound raw, there are some pretty decent moments and overall you can hear these guys love what they do. But nowadays decency doesn’t cut it, with all the great stuff coming out these days.

Then again, I might be wrong about this band because I see a lot more positive reviews than negative ones.