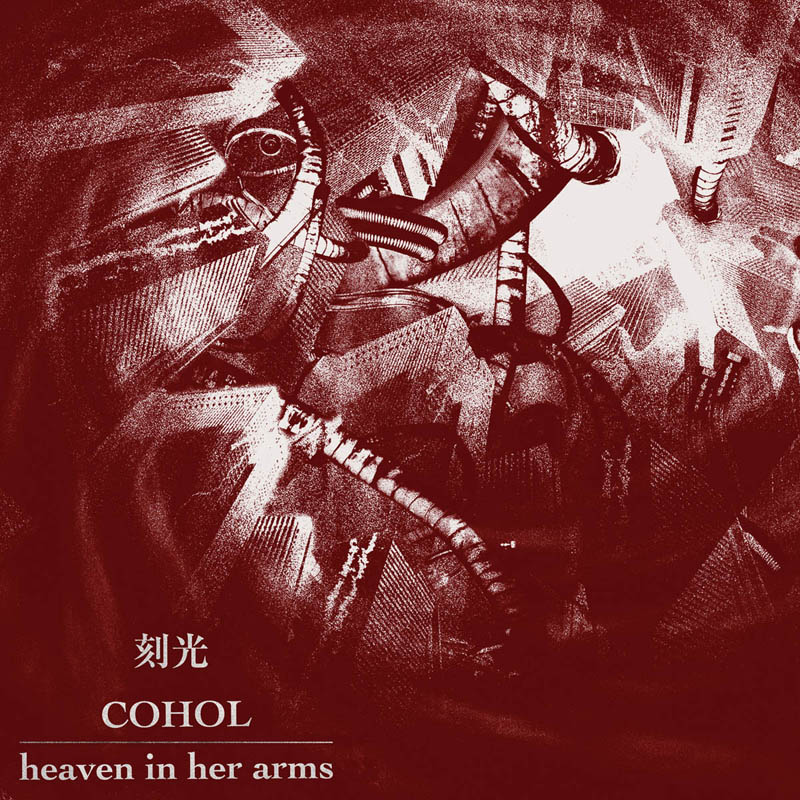 I’ve always had a soft spot for Japanese bands. When I first discovered Heaven in her Arms I heard their tremendous Envy influence but I totally loved their intensity and energy in their mix of Screamo, Postrock and some Converge influences. When they played last summer in Cologne I didn’t hesitate to drive from the Netherlands to the ‘Heimat’ to see their intense show in a hot squat. What already was revealed on this split with Cohol (before the vinyl version it was released on CD in Japan in 2013) became truth live: they’ve slowly incorporated Black Metal drum patterns in their sound.

Without losing emotion, melody and intensity, be it at a live show or on the three songs on this split, Heaven in her Arms is taking a new path. In the entrance entitled ‘Flash of Black Light’ this is not yet heard. Slowly and focused the band is building up the instrumental Postrock. Heavier as you expected are ‘The Cocoon’ and ‘Glare of the End’; the roller-coaster is riding with intense screams, double bass drums and raging guitar riffs. The melody and the Japanese spoken words are not forgotten while the perfect marriage between Screamo, Postrock and Black Metal is played. The only downside: three songs are too short, I want more!

Cohol (also from Japan) is like Angela Gossow from Arch Enemy singing in a nineties Metalcore band heavily influenced by Black Metal from the same time-frame. Of course the Japanese X-factor is included in songs like ‘March on the Drought’ and ‘Alienation’. In the middle we have ‘The Echo’, an instrumental Postrock bridge between both songs. The Thrash atmosphere of The Black Dahlia Murder in the last song is ended by spoken words in Japanese. The Cohol side is less intense and enervating compared to side A, but once again I am eager to hear more songs.

Since this essential split recording was not available in our territories it is a wise decision from Moment of Collapse to release the six songs on vinyl. You can choose the regular black version or the gold one. Also the cover has been changed from black to brown. Essential stuff if you want to try out music from the Far East!

Bands: Heaven in Her Arms, Cohol