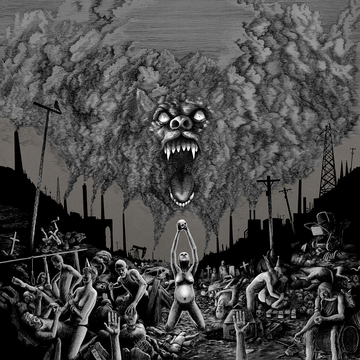 Herder has made quite a name for themselves the last couple of years. There was a real buzz after they unleashed their demo. Soon after followed by a monster of a debut. After follow-up Horror Vacui singer Nico decided to leave the band. It’s always difficult for a band to see a singer leave as they have a large influence on the band’s sound. Last year the band used the Doomed EP to introduce us to their new singer, Ché Snelting. A man we all know from his work with Born From Pain and Arma Gathas. Does it work out? I’d say it did. That EP got me psyched for new work. It had everything I loved from Herder. It’s dangerous to have (too) high expectations from a new record. Fortunately for me Herder knows how to deliver! This time a bit darker and a bit more grimm, but that suits them well.

If, for some strange reason, you’ve not yet heard of Herder, here’s what to expect: dark doomy stoner sludge. Where some bands operating in this genre find themselves writing songs in the same vein time and time again, Herder has the skills to avoid this trap. For me that was one of the surprises of this album: the diversity of the songs ranging from slow doomy songs (Soul Harvester or Pythia) to fast ragers (Gods). I knew they where able to do so from previous records, but it seems they improved their songwriting skills even more for Gods. Somehting that remained the same is the use of samples (for example in the opening song). Unfortunately they’ve never used samples as hilarious as they used on their demo. Don’t worry, I’ll learn to deal with that… Oh, the sample was taken from True Detective this time in case you were wondering.

Highlights of the album for me are the faster songs: Gods and Stab (which you can also find on the a-side of the Doomed EP). I enjoy the slower, doomy stuff, but these songs are where Herder really shines in my opinion. Just try not to bang your head listening to stuff like this. I tell you: it’s near impossible!