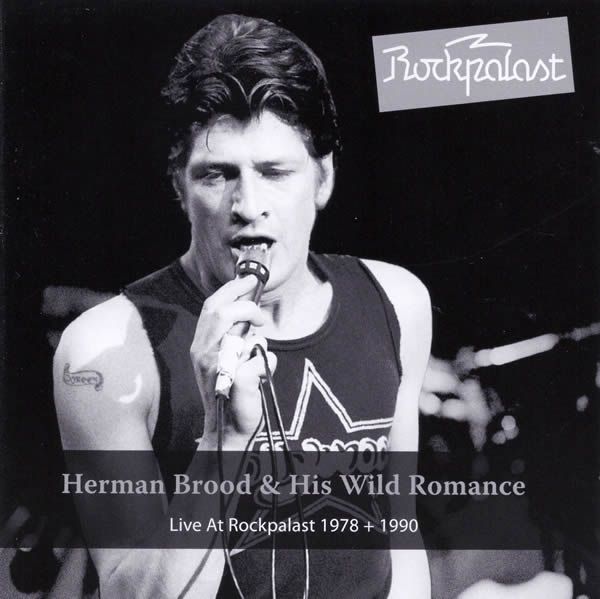 I’m not quite sure how well known Herman Brood is outside of the Netherlands, but since Frank Black (The Pixies) made an album, Bluefinger, based upon the life and works of Brood there might be some foreign readers who do know who he is (I’m not going to talk about the tribute U2 did when they played the Netherlands, because U2 sucks. And you know it). Anyway, if you’re not familiar with the man, this might be a good starting point. So why are we reviewing this on SWNK? Because you can say a lot of things about Herman Brood, but you gotta admit the dude was pretty punkrock. Or rock & roll. Whatever you want.

There’s a DVD and a 2CD version of this release. Both have the same 2 German shows on it. I don’t know if Rockpalast is still around, but I that program just might be the only German TV show I ever watched. They did lots, and lots of live recordings. First up is a show from the 9th of December 1978 @ Westfalenhalle in Dortmund. The second show is from the 11th of December 1990 @ Live Music Hall in Cologne.

I’m not going to pretend that I’m the biggest Brood fan out there so I’ll keep it short and superficial, but damn, that 1978 show is really great. The band that’s backing him is really tight and this show is a great reminder of how good a singer and musician he really was. Something that people might have forgotten in the last years of his life. They’re launching song after song into the audience. They absolutely rip through their set, almost no breaks. 24 songs in less than an hour. That’s not bad huh?

And then we make the 12 year jump to the second show. I don’t know if it’s the sound/mix of the second show, but it’s pretty clear 12 years have passed. And they didn’t do Herman Brood much good. It’s not a bad show (at all), but when you compare it to the first show, things have changed. You can hear it in his voice and you can see it in his face. There is less energy and the audience doesn’t look like they’re that into it either. Dope sucks. Couldn’t find the version from this show on YouTube, only Saturday Night, but you all have heard that song a million times before anyway…