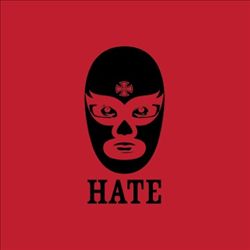 Yeah, obviously the guitar player from The Dwarves hasn’t moved far from the sound he’s used to on this record, which is a collection of earlier releases and some extra songs. HEWHOCANNOTBENAMED plays what is called ‘scum punk’ and does that with great skill. Let’s check out Love/Hate to see what this has to offer.

Poison Idea, The Queers and obviously The Dwarves, that’s the sound you can expect from this album. A weird and a bit twisted sense of humor. Surprisingly, the first song ‘Getting Maried Today’ sounds more like seventies pubrock, more remniscent of the New York Dolls, The Blockheads or Eddie And The Hotrods. So this is rather surprising. ‘Bombs’ sounds pretty much the same, with a cheery upbeat “why don’t we all get along?” sort of giving away the message. Concern starts to rise, however enjoyable this is.

..and there it is. ‘Happy Suicide’ sounds more like the gutter smacked sound you’d expect. Cynical, biting vocals and a gritty, dirty sound that you were expecting. Still, the first eleven tracks have something soppy and soft. This is, after all, the ‘Love’ part of the album. Most of it has that old punk vibe to it, but sometimes songs surprise you even more. ‘Black Eyed And Blue’ could be a folk ballad for example and ‘Toxine’ is a drinking song. ‘Valentines Day’ is an emotional song, more akin to crooners of the fifties. Also powerpop song ‘New Year’s Day’ is rather surprising, but then stuff changes.

The second part of the album is about ‘Hate’ and that’s what you get. Darker, angrier but still with an oldschool vibe to it. HEWHO… is definitely not the most talented vocalist and he does make songs sound a bit the same, but the development to a punkrock gentleman is clear. Luckily almost every Dwarf is helping out on this record and some other friends as well. This is definitely the dirty part of the album with songs like ‘Die Die Die’ and ‘Homicide Girl’. The vocals are a bit rawer, the songs a bit angrier. The album keeps surprising though, but it’s definitly one with two faces and  that works very well here. ‘Gettin’ Pissed’ has to be mentioned, being the video and quite hilarious, a bit Tenpole Tudor style. Nice!