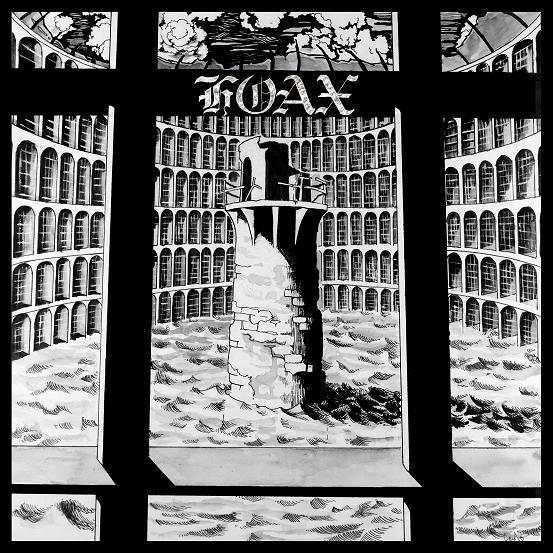 There has already been quite some buzz around this band, and this 7” , that has been released by the lovely Katorga Works Records, probably is the reason why.

Hoax is a hardcore band from Massachusetts that released their demo in 2010. They are often labeled as “mysterious guy hardcore”, “Youth Attack!-core” and “art-core”, reasons for that aren’t hard to see or hear: Hoax delivers their music with almost unmatched anger, self-hatred and suicidal despair (“abort me, it’s time, cut the fucking cord”) that can be heard in bands like Void or SQRM (a band that even shares members with Hoax). The lyrics are brought by some furious, intense yells and growls, all accompanied by a chainsaw-esque guitar and bass buzz and some almost garbage-can drums. This EP sounds raw, it sounds 80s, it sounds analog.

In the mere 5 minute -taking 7” Hoax manages to bring a breath of fresh air; they are bringing the dangerous, dark and raw side of punk back to hardcore, a thing that many have been missing. If you are one of those who have been waiting for some negative, harsh sounds… Give this one a listen, I’m sure you won’t regret it.