Hollow Earth – We Are Not Humanity 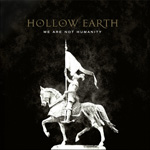 Panic Records latest signing Hollow Earth is a new band with a sound which brings back the late 90s. This is the band’s first output, having started writing material in late 2011. Yet nothing about this sounds like this is a band in its infancy, far from it. Given that 3 of its members have done time in Shai Hulud (albeit 2 of them only on tour) one can understand the band members do know how to play their instruments. And they certainly know how to write as well. Heavy, pummeling metalcore akin to Turmoil which is fairly technical but does not go overboard with crazy riffs or weird tempo-changes and such. Musically this band is more focused on writing songs and creative riffs than showing off their skills, something which I can appreciate. They also don’t waste a lot of time with intro’s or outro’s or long wavering instrumental parts. This lack of breathing space can make the songs sounds alike at times tho. The vocals are definitely a stand-out, very intense screams which remind me of Rob Fusco (One King Down, Most Precious Blood) which is always a good sign.

All in all, a great start for this band. This band is not trying to re-invent the wheel, but they are playing with passion and intensity, which is all anyone could really ask for. The 2nd track, ‘On The Bounty of The Gods’, is the stand-out track for me, but to be fair, this 6-song EP is a great listen from start to finish.