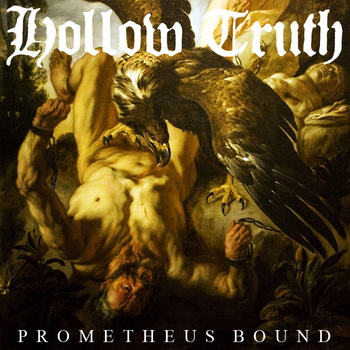 Sorry for that, couldn’t help myself! If you’re gonna play crossover (the eighties kind, but you’ve figured out, right?), chances are you’re going to be compared with the classics, in this case one of the best crossover albums ever made: Best wishes. It isn’t completely fair to push a new band in a corner and leave ‘m there, no matter how convenient that would be to a reviewer. Besides, it wouldn’t do them justice to state they are a pure clone, rehashing old material. Let’s have a look what the Irish gents of Hollow truth bring us on Prometheus bound. Now, I will admit that I am a lazy reviewer. I usually refuse to discuss every single song on a release. I will make an exception for Prometheus bound though. With only two songs and a total playing time of just over four minutes I should be able to pull that off.

With sword and salt: countdown and go. We blast into this song with a fast thrash riff. The drums are a bit slower, like Leeway does a lot as well. Speaking of Leeway, Hollow truths singer sounds a bit like a cleaner version of Leeways singer. At 1:30 the songs slows the pace down a little bit for the obligatory mosh part, after which this short rager is already over.

Prometheus bound: the main riff on this song is more catchy than on With sword and salt. The chorus on this song is also catchy as hell, with the band providing some extra vocals. Again the bridge of this song is very moshable.

This demo is a big improvement on their previous demo, both production wise and songwise. It sounds more clear and crisp, the songs have more flow, the breaks sound more natural. And I’m very happy they left the harsh grunt-like vocals they used a couple of times on the first demo out this time. The tough guy vibe that was brought by that voice was totally misplaced. I hope they keep improving themselves in this pace!

The absolute downside to this demo is that it’s way too short. It leaves me hungry for more. I guess that’s a good thing, isn’t it?

This demo can be downloaded for free or purchased on tape (do you like it old school? Here you go!). And while you’re at that, get the other demo as well… I am looking forward to new work from these Bray Area hashers (no typo)!