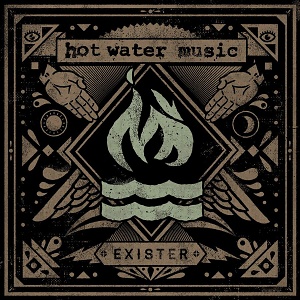 Hot Water Music has something to lose. Their musical output before the breaking up six years ago has since been recognized as some of the most powerful punkrock made in the last decades. Chuck Ragan especially is walking on a thin line. His solo records and Revival Tour paved the way for a whole new genre within punkrock or a whole new audience for acoustic music that pretty much depends on your point of view. Why give up that comfortable position and the success of reunion shows for the sake of 13 new songs?

‘Mainline’ the opening track of Exister however feels like that warm bath. It’s good to hear Wollard and Ragan together again on new tracks. Though the first minute of ‘Boy, You’re Gonna Hurt Someone’ might be too experimental for the real Hot Water Music purists. There’s more new stuff happening on Exister though it’s mostly small stuff. The band hasn’t changed their sound radically, Exister isn’t Metallica’s Lulu if that’s what you feared.

The weakest track on this record is ‘Drown In It’ which sounds too much like a rehash from the Toybox/Doghouse-era Hot Water Music, a sound that’s welcome during their live sets when they play those songs of old, but out of place on this Bill Stevenson produced record.

I for one expected that more influences from Ragan’s solo work would shine through on Exister. Maybe the other three members held him back or he wanted to make a pure HWM record but when the more ‘Americana-like’ stuff does come round the corner it makes for the best track on the whole record: ‘Pledge Wore Thin’. I understand too much songs like this one would make Hot Water Music to become Chuck Ragan with full back-up band, but another song like that one wouldn’t have been misplaced.

Not that songs like ‘State Of Grace’, ‘Wrong Way’ or ‘ Paid In Full’ are bad. They just sound so much like the songs from The New What Next (the last HWM record before the break-up) it’s like… the band never broke up.