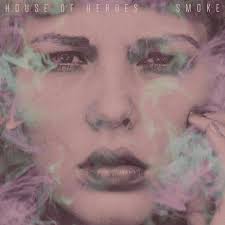 House Of Heroes take alternative rock by the scruff of its neck. The band from Ohio blend monumental and memorable guitar riffs with snotty nosed sneers. They implement and incorporate a style that is rarely used these days. Music has went down a pop punk laden road, eating into the genre. But, House Of Heroes have challenged the norm with an album that is short but heavy in focus and scintillating sound.

The new album is called Smoke. It’s a record that plays on love, its upsides and downsides. It follows no rituals or path. The combination of rattling guitar solos with evocative vocals is great. The band taps into their own world that is neatly coloured in a rainbow with a tinge of darkness fluttering behind. Lyrically the record could be perceived as being soppy or tear drawing, but it all works.

The 6 track album starts with Bottle Rocket. The song commences with a radical guitar riff that evolves. The vocals pound the microphone, offering a diverse input. I Fire Only We Knew is calmer and has a unique vibe strolling through it. The lyrics float around like a paper aeroplane that is touched by a soft current of air. They’re instinctive and lovable. Satisfied opens with a perfect guitar extravaganza, then the vocals are processed with a subtle touch.

House Of Heroes give their all on their new record. They let go, quivering the spine in the process.