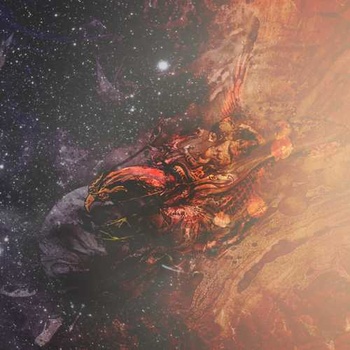 Huata and Bitcho seem to be fighting a battle on this album: who can deliver the most spacey doom/sludge? Both bands play sludge and add elements that make their sound extremely spacey.

On the A-side we find Huata from France. They add organ and other synth sounds to their Sleep like sound to create an unworldly atmosphere. They deliver two songs, a 15 minute monster and a 5 minutes long song. Both are great. First of is The Retaliator. This song contains enough twists and turns to remain interesting throughout the complete 15 minutes. Next up is Hercolubus, with only 5 minutes by far the shortest song on this album. Being shorter makes it also a bit more focused and in your face as it’s more sludge and less psychedelic.
I don’t know their 2012 album The Atavist Of Mann, and even though I understand that that album is bit different (heavier), I need to check it out soon!

On the B-side the Dutch band Bitcho delivers one track: 10050 Cielo drive (apparently the address where actress Sharon Tate and a couple of others were murdered in 1969). It’s the first thing we hear from them in 4 years. Bitcho adopts a more monotonous sound than Huata and uses electronics to create a more industrial sound compared to the (relative) warm sound of Huata. That being sad, they are at least as far out in space as Huata. After a long intro (4 minutes of build up) Bitcho starts crushing you with repetitive riffs. The vocals are almost chanting (with effects all over them). The bass sound deserves some extra attention, since it never sounded as mighty and powerful as on this song!

Quality-wise both bands have delivered a  top quality work of art. Huata is bit easier on the ears, but Bitcho’s approach is my favorite. I can fully understand if you beg to differ, though!

On a side note: compliments for the beautiful artwork!