Human Demise – Of wicked men and their devices 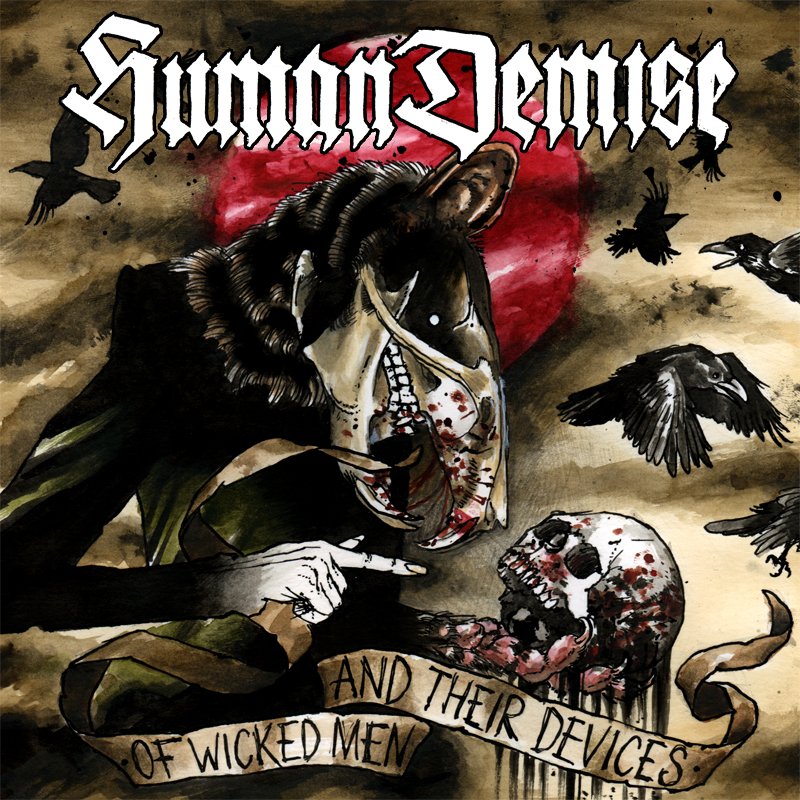 In the nineties you had a lot of bands that discovered the bible. Especially the chapters which mentioned the end of times and the apocalypse. Most metalcorebands and Clevobands spit out more apocalyptic visions than the whole catholic church in a century. It’s not a sign of the times because every historian will tell you that as long as people could write they wrote about the endtimes. You could call Human Demise an apocalyptic hardcoreband. Still you will sell them short with that label because they offer much more.

In the age of instant gratification Human Demise does absolutely quite the opposite and gives you an album that you can really sink your teeth into and it doesn’t disappoint. Quite the opposite. At first ‘Of wicked men and their devices’ sounds like the bastardchild of Integrity and Kickback. Fans of these bands will love the fivepiece for the simple fact that they sound just as mean, sick and dark as their bigger counterparts. That said there is one thing that keeps this album from being a straight up classic. The neither fish nor flesh vibe I get doesn’t bother me as much as it does with millions of other bands. It’s pretty hard to lay a finger where this vibe starts but on the other hand I had this problem with Cold As Life, All Out War and Liar. It took me quite some time to get a grasp on what I was hearing. And these bands belong to my favorites now so don’t let this detail hold you back at all.

The songs rarely do what you expect them to do. The vocals of Maurice are a pretty big factor on the album. His mean and aggressive style is in the same vein as Jeff Gunnels and Mike Score. You really get the feeling that there is something very wrong with this guy. And you forgive him for being pretty monotonous through the album because the vocals just sound so damn cool. The only thing that I miss are the arrangements. There are a lot more possibilities and allthough you hear it was clearly a choice to do it like this there are some parts that could have used some more fleshing out. Again, this is not a problem at all and I am just a whiny bitch.

When it comes to the music there is a lot more going on than you would expect. The guitarparts are pretty detailed and hold some surprises that you won’t hear the first few spins. These guys must have some thrash albums in their collection or subconsiously have tapped into the brains of Gary Holt from Exodus. This makes it all the more an album for a much broader audience than only hardcorekids. That is where the strength of this band lies. This would have been a weakness 20 years back but nowadays we are used to bands that doesn’t limit theirselves to one genre.

The highlights of this album are ‘From Bigatory’ and ‘Servatius’. The only problem with the last song, which is a monologue from a radioshow with music added, is that it shows how much more added value could have been there when they did more with samples. If they would have done that this album would have been a straight up classic. Now it’s a damn good one with loads of possibilities for the future of the band instead of the downward spiral every band plunges into after the release of a classic album.