I Question Not Me #2 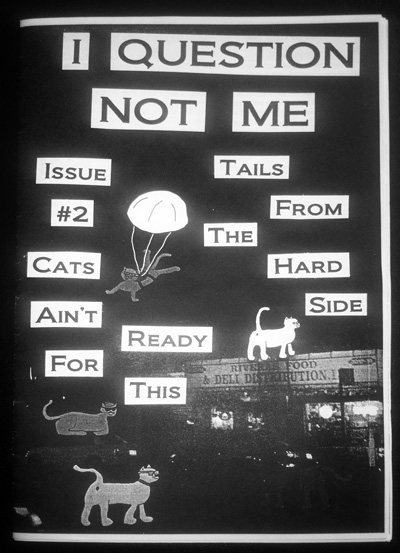 I always LOVE the zines Becky Miller does. Double Rabies, I Question Not Me, she also did some stuff for Lifers… When a new issue arrives, I usually drop everything I’m doing and finish it in one go.

Why? Not because they look amazing (aside from Lifers which looked great). Because it’s pretty , no let’s be honest, it’s pretty ‘bad’ copy & paste stuff. And it’s not because of the in-depth interviews. Because I Question Not Me has zero interviews. So why then?

Because I love to read Becky’s ramblings on NYHC. You know those girls who keep rambling and rambling? Imagine that, but now on a subject you actually like and by a girl who actually knows what’s she talking about. And it’s different. No standard interviews, reviews and stuff like that. Sounds good right? Read on.

The zine opens up (after the intro and contact info) with 3 pages of top 5 lists. Stuff like top 5 secret tracks (more on that later), top 5 songs where bands mention their own name, top 5 songs with guest vocals, top 5 mid-album songs with best intro’s or top 5 songs that Becky hopes the early 2000’s will be remembered for instead of American Nightmare. Usually I don’t care much about top X lists, but done like this it’s fun.

The next 5 pages deal with “NYHC / The 914: Filling In The Blanks”, where Becky expresses her love for underrated bands like Burnbath, The Krays and Awkward Thought. I have heard a couple of Awkward Thought track ages ago (and it didn’t stick), the other two I’ve never heard of. Her enthusiasm makes me want to go check them out though.

Those top 5 secret tracks I mentioned earlier? Although they’re not all the same as in the top 5, in 4 pages she talks about the background and mystery about a couple of tracks. Subzero, Jawbreaker, Wisdom In Chains… I love original content like that. The same goes for her article on “Second half albums: Late bloomers or in some cases, On Three”  where she talks about albums that really blow you away during the second half of the record.

I could summarize everything in the zine, but just pick it up yourself. By now you probably have a pretty good idea if this will be your kinda thing or not. I’m looking forward to I Question Not Me #3 (Try to finish it before 2016 this time Becky haha) and Double Rabies #7 already!