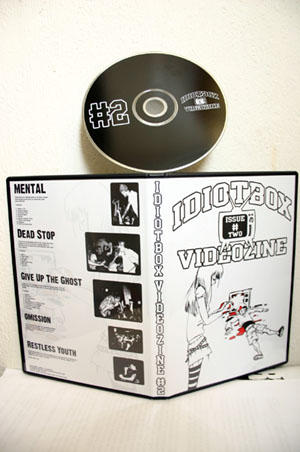 For an introduction to the Idiotbox series I refer you to Lou’s review of the first release from this fine DVD series. The only downside of the previous edition was the sound quality which wasn’t that good, but they improved that a lot on this release; the sound is great !

This edition has interviews & shows of Mental (footage of 3 shows of their European tour), Dead Stop (Light The Fuse fest and the Dead Stop release party) & Give Up The Ghost (final European tour, Amsterdam & Arnhem) and has video clips of Omission & Restless Youth. The layout of the DVD itself, the menus, etc and the cover art is really good. They used old flyers for the navigation, you just have to check it out for yourself to see how it looks and works. Nicely done.

The ONLY downside I could find (and I had to search hard to find one) is the fact that they don’t list which Omission song is used while they do state which Restless Youth song they use on the artwork. And when that’s the only downside I could find, you know what time it is, if you’re into hardcore you should pick this up through the Idiotbox website.