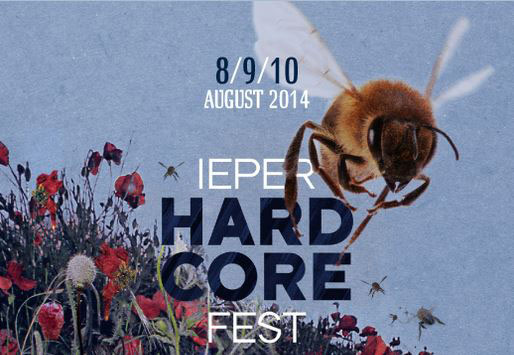 One hundred years ago World War 1 started. For four years hundreds of thousands of young men lost their lives fighting all over the world. One of the hardest battles was fought in the area around Belgium’s Ieper. Four long years armies hardly moved forward. Trench warfare. Teenagers caught in the mud and rain with bullets flying over their head. That was then, this is now. During the past 20 years Ieper in the summer has grown to become the capital city of European hardcore. The Ieperfest has become a worldwide phenomenon and this year’s edition promised to be a legendary one. No Warning reunion show,  Gorilla Biscuits, Ringworm, Converge, H20. It was enough for over 12.000 people to buy a ticket.

I won’t go and give a review of every band that played over the course of three days, mainly because I haven’t seen everything. But some highlights and lows of three days of mud, rain, vegan food and loud music:

Turnstile: without a doubt one of the best performances of the year. The boys from Baltimore played a well received and energetic set which left many people in awe. A tight band and most importantly an energetic frontman is all you need to get the masses going.

Bane: probably the last performance of Bane at Ieperfest. Due to the heavy rain the organizors decided to move Bane’s set from the open main stage to the biggest tent and that decision paid off. The band played a short, fast paced mix of old and new songs. Fingerpoints, stagedives and moshing. Bane’s final backward glance was my personal highlight.

Antidote: after that pretty bad new record on Bridge 9 I didn’t really care about seeing Antidote play. Boredom got the best of me and I decided to check it out anyway. If it wasn’t for the singer’s hat I would be feeling really good about these oldsters. Kicking off with ‘Something Must Be Done’, playing some well received covers and ‘Foreign Job Lot’, Antidote kicked ass. This was one solid performance I didn’t expect to see.

Angel Dust: one of the most talked about newer hardcore bands played an energetic set as well. The crowd didn’t go as crazy for them as for Turnstile but it was good enough. They have that summer punk vibe that could appeal to a bigger audience.

Kids Insane: heartfelt and energetic hardcore on the melodic site from Modern Life Is War. A thousand times better than all the tough guy beatdown bands that were also playing if you ask me.

Toxic Shock: being one of the most energetic live bands in Europe, you just know that Toxic Shock is the best wake up call for anyone at Ieperfest. Then again, playing before noon is not something most bands like to do. But the Shock brigade did their best and once again were one of those bands able to gain new fans just by putting up the best performance possible. Wally didn’t get as crazy as he usually does but with a hangover and sprayed ankle he’s excused.

Morning Again: for the first time ever in Europe Morning Again with Damien on vocals. All vegan edge moshers from back in the day should have been there to witness this. They got everyone moving like it was 97-98. Impressive and good.

Blind To Faith: if there was any band that brought back war to Ieper it was Blind To Faith. Unfortunately Infest didn’t play, but for those looking for the soundtrack of  fast paced destruction this was a good compromise. Though compromise isn’t the right word when talking about Blind To Faith. Can hardcore in 2014 still be dark and dangerous? Yes.

And now about the return of No Warning. I didn’t expect much of a band that hasn’t been playing for a long time. But for a reunion show this was really good. At least music wise. Ben Cook however seemed to be enjoying his time in the spotlights maybe a bit too much. I also expected an even more crazy response from the crowd but maybe the muddy terrain kept some people from going off.

Gorilla Biscuits: as good as their perfomance at Groezrock was a few years ago as boring was their Ieperset. To me Gorilla Biscuits should be energetic, fun. This was midpaced and far from energetic. Where the band should be able to put a smile on your face, this time I couldn’t do more than frown.

Converge: was it playing just before the anticipated return of No Warning? Was it the bad sound quality that most band playing the main stage had to deal with? I don’t know but Bannon and co hardly made an impression.

Yet the biggest let down to me is the fact that bands like Deez Nuts get to play Ieper. For a festival that is all about animal rights and ecology it’s pretty strange to forget about human rights if that means less people attending. Why does a band like Deez Nuts who aren’t really all about feminism get a chance to play a fest like Ieper where they have a workshop on feminism is beyond me.