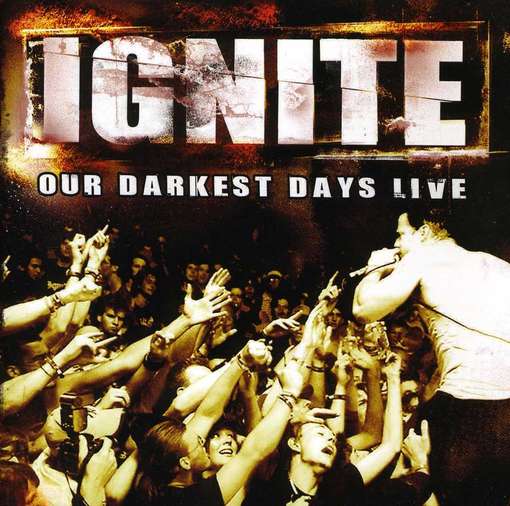 Ignite started in 1993 as what could be called an all-star Orange County hardcore band, featuring singer Joe Nelson (Triggerman), guitarists Joe D. Foster (Unity) and Gavin Oglesby (No For An Answer, Carry Nation), bass player Brett Rasmussen and drummer Casey Jones (Justice League, No For An Answer). Their early releases consisted of warm, passionate, positive hardcore anthems that combined the old school energy of bands like Uniform Choice and No For An Answer with more layered, melodic post-hardcore influences of Dag Nasty and Embrace. Neither original frontman Joe Nelson nor his successor Randy Johnson could carry a tune even if their lives depended on it, but on the debut 7″ EP ‘Where They Talk’ and the following mini-album ‘Scarred for Life’ (which includes the first EP) they screamed so passionately out of tune that it didn’t matter. At least not to me.

Things really took off for Ignite when vocalist Zoli Teglas, a son of Hungarian immigrants, joined the band in 1994. His high, clear voice seemed to go perfectly with Ignite’s music, and although the band was now sometimes mockingly referred to as “opera hardcore”, it’s hard to deny that Teglas turned out to be one of the most skilled singers that the hardcore genre ever produced. On 1994’s ‘In My Time’ EP, a considerably faster and more straight forward release than the previous ones, and the 1995 full length ‘Family’, which returned to the original sound and recycled a few songs from ‘Scarred for Life’ and the band’s 1993 demo tape, Teglas was the star of the show. Both these releases were combined on the album ‘Call on My Brothers’. The final release by Ignite’s “classic” line-up was the 1996 EP ‘Past Our Means’, which was music wise somewhere in the middle between the ‘In My Time’ and the ‘Family’ material. After that, not much happened for several years.

In 2000 Ignite returned, but without Jones and chief songwriter Foster, leaving Rasmussen as the only remaining original member. On the new album, ‘A Place Called Home’, Ignite sacrificed their unique original sound for a more solid, more streamlined and more professional blend of hardcore, punk, rock and pop. Another album in the same vein, ‘Our Darkest Days’, followed in 2006. So Ignite released just two albums in the last sixteen years, and to further underline the fact that they don’t exactly like to rush things, they now release their first DVD, which contains a live show that was shot four years ago (in Leipzig, Germany in 2008) while they were touring on an album that was already two years old at the time.

With the band’s twentieth anniversary in sight, it would have been nice if this DVD would have been some kind of career overview. But it’s not, despite what Brett Rasmussen claims in the liner notes: “We did our best to play songs from all eras of the band, so newer and older fans would be equally happy with the setlist!”. Well, no. In fact, ‘Our Darkest Days Live’ contains 17 songs from the band’s last two albums and just three (‘Ash Return’, ‘In My Time’ and ‘Embrace’) from the early years. Personally I think it’s a shame that Ignite lightly skims over the material that took them where they are today, the songs that earned them a lot of their most loyal fans. And around the end of the DVD, it’s almost as if the band deliberately tries to make clear that they really couldn’t care less of they still have any hardcore credibility left: after a very unnecessary rock star type drum solo there’s the U2 cover ‘Sunday Bloody Sunday’, followed by two semi-acoustically performed songs, ‘Slow Down’ and ‘Live for Better Days’.

Throughout their existence, Ignite has toured Europe so often that they might as well just relocate to this side of the Atlantic. So if you’re into this band, you barely have an excuse for not knowing what they’re like on stage. And this DVD presents a typical relatively recent Ignite show without anything even remotely surprising. Which isn’t necessarily a bad thing, I think it’s nice to just have such a show documented and within reach to watch whenever you want, whenever the band happens to not be touring in Europe for a while. The footage is professionally shot and the sound is great. Special features include the music videos for ‘Bleeding’ and ‘Slow Down’, plus “making of” footage of the ‘Our Darkest Days’ album and the ‘Bleeding’ video. Another cool bonus is that the full concert is also included on audio CD.

Final verdict: this is a decent live DVD, representative for how this band is live. So it’s quite simple: if you’ve seen Ignite on stage a couple of times in the last six years or so, you’ll most likely have the same opinion on this DVD as you had on the live gigs.

Check out the official trailer here: