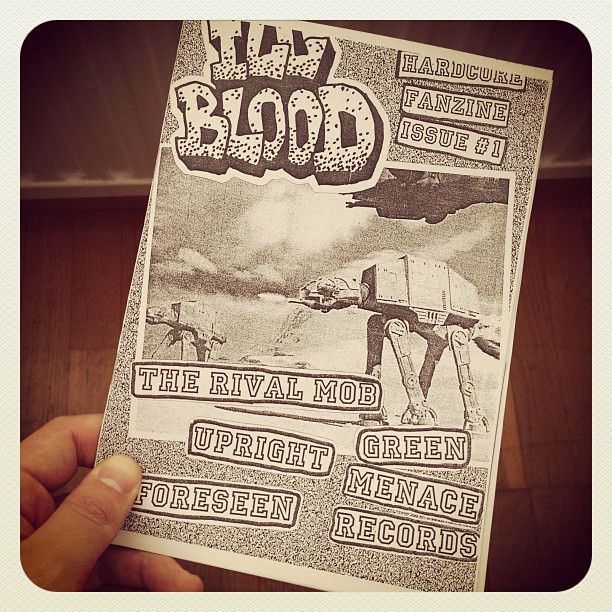 It’s not Suffer, Survive, but hey, Ill Blood is a pretty okay record. Okay enough to make people cover songs from the record, make some Belgians put up a fest with that name (would have loved to see that World Collapse show with a girl on vocals!) and now Samuli from Finland put out a fanzine with that name. And I’m probably forgetting tons of other references. (Yes I know it’s the favorite No Warning record of most of you )

Sometimes when you’re on tour you see a zine you would like to read, but simply can’t because it’s in a language you don’t understand. That happened to me when I was in Finland and saw a zine Samuli did. He remembered my interest though, because a year later I got a message if I was interested in his new zine. In English this time.

Ill Blood – Hardcore Fanzine Issue #1 features The Rival Mob, Upright, Foreseen and Green Menace Records. I don’t know about The Rival Mob, but the other 3 are made up of great people, that alone was reason enough for me to pick up this zine.

The zine looks cool. Total copy & paste worship and I liked the interviews. Justin (The Rival Mob) talks about mopping Sam Triple B’s floor and he compares The Rival Mob to a cute teddy bear. Daniel (Green Menace) talks about his XBOX 360, Agent Attitude’s crocodile, him wishing he had an Icelandic wife and stuff like that and he has a GIGANTIC thanks list. Let’s all hope Daniel will never win a proper award or something because he probably will go on forever thanking people. Niko (Yo Niko!) talks about the tour with Said And Done which he says are “good dudes and best of times”, which kinda dissapoints me. Because I thought we were awesome dudes and better than best of times. But hey, it’s okay Niko. We still love you guys (and you too Heini) 😉 Mirko (Foreseen) talks about playing in the basement of a pizza place, singing karaoke at the ferry and wanting to put out records on Roadrunner. So nothing to complain there.

While I do prefer longer and more in-depth interviews myself most of the time, sometimes you just want a short ‘snack’ and this zine is perfect for that. Not every zine has to be Anti-Matter or Law & Order of course. Next time he should check their layout before making copies though, every page is missing parts on the borders of page, it’s not like you’re missing out of any of the conversation, but still… Oh well, stuff like that only leaves room for improvement in future issues. And I hope there will be more. Samuli talks about a second issue featuring Cold World & Eye For All. Send me a message when it’s out Samuli, because I’ll pick it up again!