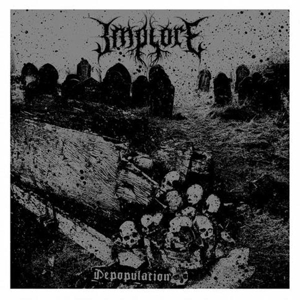 Implore is rising in the global crust/grindcore scene as fast as cauliflowers in a field. In their two years existence and one 7” EP under their belts they already toured around the globe. When I received their debut album ‘Depopulation’ the band name didn’t ring a bell. However when I read the biography they already supported ACxDC on tour and I already saw them in the Netherlands. During that live show they were decent but didn’t leave a remarkable impression.

When I listen to ‘Depopulation’ I have the same feeling. Sure the Swedish styled saw buzzing guitar parts are feeding your brains as Entombed and Swedish grindcore acts like Nasum did in the past. Still I miss sleaziness and a band that shows an own face. In 2015 it is difficult to stand out as an extreme band but I expected a bit more experiment and persuasiveness behind this professional trio.

They already managed to get Heaven Shall Burn’s Christian Bass and Kevin Talley behind the drumkit (he played on the EP). Bass started as the drummer in the band, couldn’t record the first EP and tour but has played his parts on the album. In the first song “Epicyte/Parasite” the drum sound and riff immediately reminds me of Heaven Shall Burn; this doesn’t take long as the band goes full throttle in the rest of the songs.

The slow beginning in “Hegelian Dialectic” is the preparation for a couple of grindcore bullets including pissed off vocals. Typical hardcore breakdowns and samples in ‘Ruthless Conspiracy’ give some air to breathe. The problem is the (drum) sound is too clean for this type of music; another issue is you almost can dream how breaks and fast parts are following up in the songs.

The biography talks about ‘a solid grindcore album’; I would add there is also Death Metal and Hardcore woven into the songs but the writer of the biography is not far off from the truth when using the word solid. ‘Depopulation’ is a solid debut, nothing more than that.