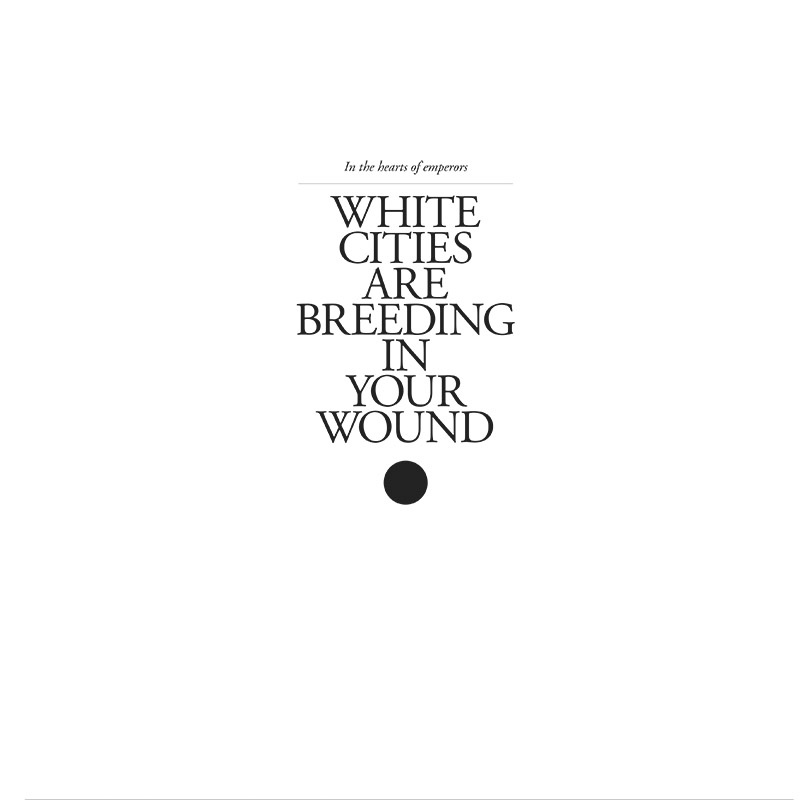 In The Hearts Of The Emperors is an instrumental postrock/metal band from Sweden who previously released two split albums. I reviewed their split LP with Reka and what I heard were decent three songs. That album has cold and sober black artwork; this one has a white cover with artwork similar to Joy Division’s compilation ‘Still’. Musically there isn’t a comparison with the post punk of the leaders of men though. There are no song titles on the cover; only on the vinyl sticker itself.

The album starts much more anxious, doomy and heavier than expected after the ambient introduction “Memorial Pt 1”. In the title song they opt for experimentation this time, which is a good thing because the songs on the split weren’t the most creative ones in the genre. They mix it up with a cold Swedish atmosphere, threatening riffs and even hellish screams.

In The Hearts Of The Emperors impresses me really with these two first songs. Later they switch back towards Godspeed You Black Emperor territories (also because of the spoken word samples). The melancholic & dramatic postrock has one climax to offer and if you reflect afterwards Side A is like a musical book of a person who has its ups and downs.

The balance between heavy doom parts, slow reverbing guitars and subtle drum poundings on side B is striding towards a climax in the end. The melancholy in the musical work is still around if the main character still has a huge load on his shoulders. In the last climax he/she finally can release it and be happy with his life.

In The Hearts Of Emperors doesn’t want to sound sterile and perfect on this record. The pounding end riff with melodic undertones in “Believing Believing Believing Together” is feeling like a crustcore band playing on 16 rpm. ‘White Cities Are Breeding In Your Wound’ is not easy going stuff; just like Fall of Efrafa it takes some time to understand what the band has to tell. After a couple of spins I didn’t know what to think about it. Finally I found the key to make the puzzle complete; my reward is a beautiful album from a band that I didn’t expect they could surprise me that much!

Band: In the Hearts of Emperors