With over fifteen thousand visitors the 2012 edition of Incubate was by far the most successful yet. Here’s a small glimpse of what you”ve missed if you weren’t part of the fifteen thousand.

Yeah I know Incubate kicked off on Monday with Napalm Death and Dr. Doom but I’m gonna try and review the festival from a hardcore perspective (if such exists) and Friday was day one of the free hardcore shows in the basement of V39. Compared to the Hall Of Fame, 2011’s venue for hardcore at Incubate, the cellar is not as large thus making it the perfect spot in Tilburg for these kind of shows. Though I have to admit that when Swindle from Friesland started playing I feared the total amount of Incubate visitors into hardcore was going to be five. Despite the lack of an audience the foursome kicked into a set of fast, angry hardcore. I especially like the singer’s voice which at times reminded me of Jeff ‘Breakdown’ Perlin. Not the kind of singing you connect with fast hardcore but it worked for me.

After Swindle it was time for Belgium trashers’ Toxic Shock. More people had found their way to the cellar by then and they saw a pretty good show that musically was more on the trash metal side of the spectrum but with a hardcore attitude. Municipal Waste you say? Well something like that, yet not as catchy and a bit more core.

When putting up a fest in the Netherlands with some fast bands you have quite the choice of bands to book. Milkman, Citizens Patrol, Cracks In The Wall and more come to mind. However it was Sex Drive who came on stage and kicked in their full on assault of old time hardcore. Johnny Z was the raging madman like usually kicking and screaming and trying to break some on the stage monitors. The band have grown a lot from their first show somewhat a year ago on RnR Fest and aren’t planning to slow down soon as a new 7″ is in the works. Guitarplayer David promised some slower songs on that one though, which made me a happy camper.

As the evening progressed more and more hardcore enthusiasts walked down the stairs into the cellar leading up to approximately 150 people gathered to see Full Of Hell. On one of the first Incubate editions, when the festival was still called ZXZW, Trash Talk played one of their first shows in the Netherlands and the place exploded. The same intensity was around this Friday when Full Of Hell did their thing. Though I personally never listen to this kind of stuff at home, it does make for a good show.

Hey all you Incubaters when one of the best European hardcore bands around plays a free show, you’re expected to come and enjoy. It doesn’t matter that it’s just 6 pm, you’ve been walking around Tilburg for days and there are fifty other bands you can see at the same time. When Midnight Souls plays I expect you to show up. If you did you saw a great set of melodic hardcore, but you probably already know that.

The basement wasn’t the only place to be in the V39, there was the Reflections distro at the entrance and Just Like Your Mom‘s vegan catering. The last time I went to get one of their tasty burgers was at Groezrock. I had to stand in line for over half an hour. So I was surprised when there was no line at all on Friday. Things were a bit more busy at Saturday though, it seemed more people had found the best place to eat on Incubate. I got myself a great burger again and my kids went for the cupcakes while being entertained by Riekus from Antillectual. 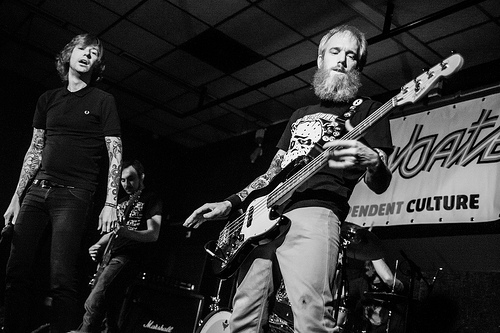 The free hardcore show ended around 10 pm with a set from local fastcore heroes Cracks In The Wall. The night was still young. Time to step outside of the hardcore frame and explore more of what Incubate had to offer. British post-rockers Mogwai for example who played in the biggest venue for around 3.000 people. It sure is impressive to listen to this band. Their melodic, mostly instrumental set reached several climaxes. I had to admit though that I have a somewhat low attention span, being used to less than two minute songs and guitarists and singers trashing around on stage like it’s the last night on earth. So after 45 minutes of Mogwai it was time for something else.

Something which turned out pretty akward. I ignorantly happened to walk into the performance of Con-Dom. I guess you haven’t heard about this performer so I will describe what I’ve seen. An older bare-chested man on stage grunting and screaming backed by industrial music. He walked off stage and went on his knees when suddenly a girl in trench coat entered the small venue and started whipping him on his back. A lot. Hard. How’s that for your Saturday night? I know I’d seen enough after a minute or two and grabbed my bike and headed for the Little Devil just in time to see a not that great Polish Black Metal band play. They’d been on stage soundchecking for half an hour and when the sound was right walked of stage to come back with some sort of cloths before their face. They sure didn’t convince me of their primitive evilness. Everyone in the cafe had already seen the normal kind of sympathetic faces behind the masks. Around 1 am it was definitely time for me to call it a day.

It took me a bit longer than usual to get out of my house and explore the last day of this year’s Incubate. Therefor I missed out on the performances of Insanity Alert and Starve. Oh well, I did happen to walk into Reigning Sound playing one of the best sets of the whole fest. If you’re into bands like The Hold Steady than Reigning Sound (another band with Greg of the Oblivions) sure is a band you’ll enjoy.

The bad thing about fests is the conflicting time schedule. I wanted to watch the whole Reigning Sound set but was also curios of  neo-folk band Cult Of Youth who were playing in the smaller stage of the same venue. Curiosity got the best of me and I’m glad it did because Cult Of Youth really brought some much needed energy to the Sunday afternoon. It was so good I afterwards went on a stroll to find the Cult Of Youth merch booth and pick up their latest LP.

The Men were up next and they’re the hype. A crowded place, sweaty people. Still it was disappointing. Generic rock n roll, songs which are way too long and some Stiff Little Fingers riffs. Not the life altering show you’ll tell your grandchildren about.

Since I was around already I did catch a glimpse of Laibach with their bombastic music. The kind of fascist image and sound is far away from my musical preferences so a glimpse was enough for me. 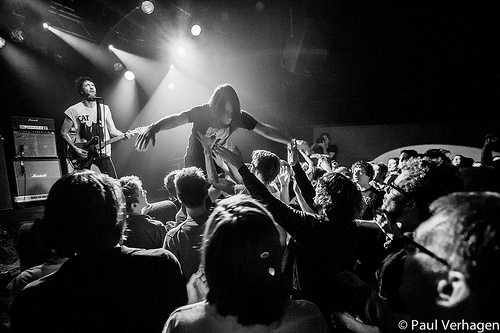 The Men was kind of disappointing and I feared that Japandroids was the next band of the night not living up to my expectations. The venue was so packed I had the idea everyone at Incubate wanted to catch up on another Pitchforkhype. I have to say from all duo’s in rock Japandroids momentarily take the lead when it comes to exciting and catchy live shows. People were slamdancing and crowdsurfing from front till back. Quite an accomplished for any band as most of the audience had already been through over three days of live music. Definitely my most memorable set of Incubate 2012.

But the fun wasn’t over yet. It was up to the Buzzcocks to finish things up punk and disorderly. Well not really. The Buzzcocks have aged but their hits have stayed the same. It’s nice to finally sing a long with the band that made some of the best punk songs in the world. But damn I was tired and another week at work waited for me on the other side of the night. Time to say farewell to Incubate, see you next year!

Speaking about Incubate 2013 here’s some free advice for the organisation:

All pictures were taken from http://www.flickr.com/photos/incubatetilburg/.