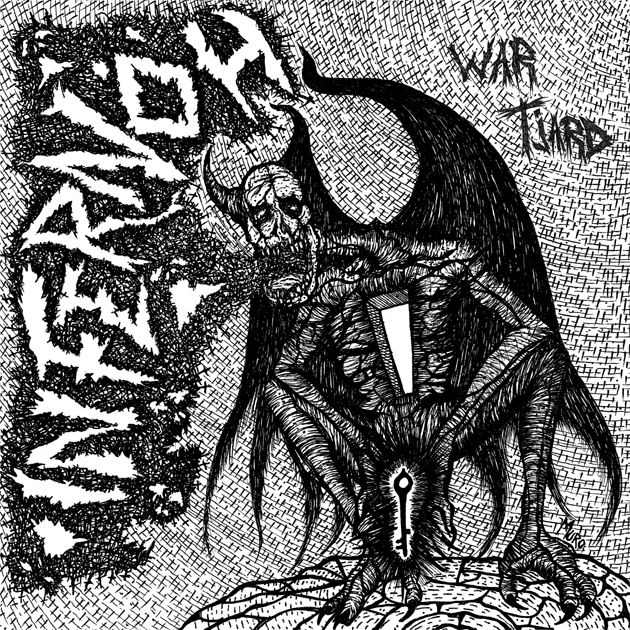 Infernöh have just released their latest addition War Tjard. I received a small letter, and off I went. This record has a comical and interesting, but brutal, cover and back. Black and white, obligatory sketches and a pretty well-drawn frontcover of a devil showing off his junk (shaped as a key). Spouting out, from his mouth: I-N-F-E-R-N-Ö-H.

At first I thought this was going to be the regular, run-at-the-mill d-beat or crust punk. Being disproven by the first song sure accounts as a merit, namely Dött Där Ögat Ser (Dead Where The Eye Can See(?). A two minute-lengthy harness of armageddon in human form, with a lo-fi soundscape. The intro is as brutal as can be, with a total in-your-face attitude. Accompanied by a riff that is to die for, and a singer screaming out: “Vem tror på hoppet i en värld som dött?” – roughly translated into: “Who believes in hope in a world that have died?”. Surely a song you’d bring to your local mosh. The breakdowns are innovative, the riffs are awfully good and the drumming is what it should be – without any compromise.

Without any further explanation, the destruction continues. A thrashy and crusy intro for a song made out of concrete and so is the title: Er Betong Måste Bort – Your Concrete Has To Go. Total mangle. “Minnet är kort, er mur måste bort!” – “Memory’s short, your wall has to go!“. Almost in the same vein as the first song, but compromised of a more thrashy feel to it. Also, sharing the speedy and primitive feeling.

But this is where something changes, the tempo slows down and a more rock’n’roll-themed song enters the game. The third song on this album, De Galna Och De Blinda (The Mad And The Blind), have a certain hint of straight-forwardness. Getting more time to reconcile with re-arrangement of emotions and think about what just hit you. Maybe it’s this sequence of the album that makes you think about what you’ve actually experienced. “Hör inget, ser inget, säger inget” – “Hear nothing, seeing nothing, saying nothing“.

The fourth song could be considered more poisonous, and I’ll get back to that. Tempo turns up a notch, the aggressive riffing returns – but further in a more controlled form of havoc turn the tables. A good shift of things, making it less monotonous. This is why it’s poisonous, if you don’t count the musical arrangement, it’s named: Driv Ut Giftet which roughly means – Drive Out The Poison.

Now, if you’ve been with me this far – lets turn up the unorthodox approach a notch. With the fifth song Krossa Guds Kuk roughly translated into Crush Gods Cock. Now things become more obligatory, like a d-beat drumming intro and a crusty mayhem of riffing and insanely fast drumming. For some reason, this song doesn’t become monotonous. It could be because of what I’ve taken up before, it could be because it’s been a long time since I heard something in this vein. “Ge upp din tro, trotsa din gud” – “Give up your faith, mock your god“.

So, this have become longer than I expected. But do you think we’re done? No. That was just the A-Side, five song total. Now – here comes the B-Side: first track is called Gamdregel, which I can’t translate. Or maybe I can, but it would be more like this: Vulturedrool. Taking up the subject of greediness and exploitation. With a hard and interesting intro, shifting itself into a breakdown before total collapse. Sounds like some old Mob 47 song, which would be an enormous compliment. “Hungriga gamar vittrar stanken av lik” – “Hungry vultures sense the stench of corpses“.

Enter the realm of the shortest song on the record. Seventh in the row: Länge Leve Mig – Long Live Me. A more narcissistic and roughly one-minute long song. It’s at this point it gets a little boring, but on the other hand – the lyrics are interesting. “Åt helvete med era regler” – “To hell with your rules“.

As the bones in my body shiver and my arms start disintegrating, I’ll leave it at that. The last three songs: Strida För Vadå? (Fight For What?), Inferno and Kyla (Cold) – are all great songs. I really can’t give enough praise for this record. The only thing that bothers me is the monotonous feeling, or the feeling of it never ending. But I guess that’s a part of why it’s also pretty damn good. They sound quite different from the run-at-the-mill and thank god for that, because if they didn’t – I would’ve been awfully bored by the first three songs. I’m looking forward to the future releases, and a damn good job was done with this one.

They’ve also managed to induce somewhat of an oldschool sound, but with a new touch. If you like Mob 47 and d-beat scandicore like Frigöra, Krigshot or the more blackened crust like Hotbild – you’ll probably dig this too.