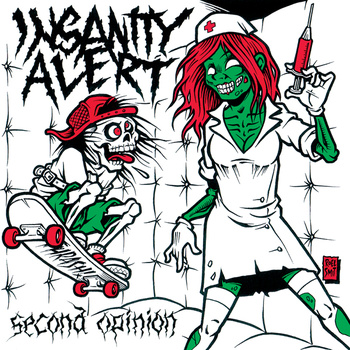 When looking for a vocalist for a hard hitting old school crossover thrash band, everybody’s favourite Rotterdam punk rock stand-up comedian Kevin Aper might not be your first pick. However, ‘Heavy Kevy’ is the frontman for Insbruck Austria based thrash monsters Insanity Alert and man, does he do an awesome job! Replacing his trademark semi-sweet snotty vocals with a scream that would make Belladonna proud, Kevy and his boys set out on a mission to transform this reviewer into a one man circle pit.

Second Opinion, the aptly titled follow up to last year’s debut release First Diagnosis, contains roughly 9 minutes of awesome crossover thrashing mayhem in the veign of Municap Waste’s best work. It may not be very original, but these songs about Ghostbuster’s Slimer going berzerk, a giant spider attack, zombie outbreaks, murderours mobs of disturbed individuals and ripping up your hands before realising your beer bottle does not feature a twist off cap breath so much fresh energy and fun, I just can’t resist chasing my cats through the living room at full speed.

Those who wear the bill of their mesh cap upright and proud probably already know all about this band, everyone else needs to check them out and join the march of the mentally ill. MOSH!