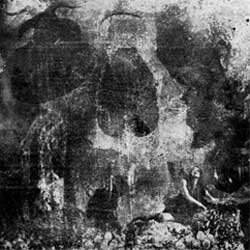 I remember the first time I heard Integ was the song Rise on a Victory Records compilation that I’d probably bought for the fucking Shelter song or something. The second time was when my good friend Karl ‘bad dad’ Tierney made me a tape with SSD and DYS on one side and For Those Who Fear Tomorrow on the other. I was 18, still used a walkman, and spend many nights going into 6am sat in Bradford University library reading about war, genocide, and the terrible things human beings do to one another while listening to this tape over and over and over again. ‘My victims never knew what was gonna happen. I’ve had shootings, knifings, strangulations, beatings. I’ve even participated in actual crucifixion. All around the world there’s people like me. Who set out to destroy human life.’ Integ was the world weary big brother I never had. And the mystique around them just made the experience so much greater. Getting told off by older mates back home for liking them because they were associated with One Life Crew, hearing all sorts of stories of fighting, guns getting drawn, cults, obsessions with serial killers, the process church, all this stuff a far cry from spazzy metal about girls that my old mates listened to and the happy-go-lucky tosh that my new friends were into. Integ seemed to be the aspect of hardcore that spoke most to me. Complex human misery and evil abound.

Then the whole integ resurgence thing started and Dwid seemed to realise that if he squeezed out a turd and put a process church logo on it he could shift 250 pre-orders at least. Integ skull trucker caps, charles manson drinking mugs, represses upon represses upon limited edition silk screened repress. And on top of that the internet got a load of Dwid and all of a sudden the mystique that had me so enraptured became some sort of sick process church LARP where all the herbs of the world united to pretend to be incredibly evil, sat in the offices of AT&T talking about aural terrorism and Aum between fetching lunch for the boss and emailing the fat girl on reception. Integ lost it’s allure once it was affiliated with real, all too real people. It didn’t help that the new stuff that came out was a far cry from the older, harder, colder stuff (OK, I liked VVe are the end, fight me), and on top of that there were just shameless represses of pretty much every record going, all seemingly to help Dwid become the first paypal millionaire. I lost count of the amount of discography records that came out, but it was way more than 2, which is already 1 too many.

Anyway, this brings us up to Kingdom of Heaven, which is a strange one to review, given my feelings on the matter. It’s essentially a combination of their side of the Integ/Mayday split, and a bonus track off the Den of Iniquity CD (correct me if I’m wrong). I would like to hazard a guess that this is the first time Eighteen has been pressed on vinyl, but then again there’s been so many Integ records in the last few years I’m just not sure. Anyway, it’s pretty much beside the point, because these are three of their best earlier songs, at a time when they were just beginning to burn brightly the black flame, casting aside the Judge influences that got the ball rolling and finding something far darker and more unsettling. The songs to this day are rich with feedback and crunch, both effortlessly heavy and dripping with atmosphere at the same time. This record celebrates the 20th anniversary of recording these songs, and is dedicated to the memory of drummer David Nicholi Araca, who died from a brain aneurism around the time of recording. If you’re dismissive of the power of this band, or influence that Integ went on to have on almost everyone that followed, listen to Kingdom of Heaven and discover a band that is a far cry from the neo-folk soundscape with moshparts you are lumped with these days.