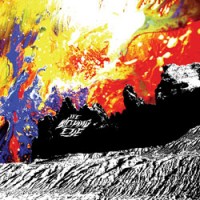 Iron Age. I don’t have to introduce these guys do I? Their first full-length “Constant Struggle” is still one of my favorite records. I rarely give 5 stars to a release (I think “Constant Struggle” and the Bad Brains DVD are the only cases I ever did that?), but I still totally agree with it. I still listen to that record regularly and songs of that record still keep ending up on mixtapes. So you can say my expectations were pretty high. Would “The Sleeping Eye” be able to live up to it?

HEAVY. HEAVY. HEAVY. Insanely heavy. That’s how you describe this record. It’s like they turned the “HEAVYNESS” switch on their amps to 12 (and then some). Man, I could talk for hours about those riffs. I’m not going to say heav… again but damn, they are. At the same time they’re extremely catchy too.

The moment you hear the opening riff of “Sleeping Eye Of The Watcher” you’re either banging your head or doing the bedroom mosh. There’s no escaping. After I sat down and listened to the record for the first time, it felt like a bomb had dropped. I just kept staring for a little bit. Know that feeling? And then I put on the record again. And again.

Nothing to complain? Not really to be honest. The record could have done without “Materia Prima” if you ask me (sound scape/instrumental kinda thing), but on the other hand it creates some breathing room, to let it all sink in. And I could say I prefer the vocal style of “Constant Struggle”, but this fits the more metal/stoner approach they’re taking (which was apparent on “Constant Struggle” already) perfectly. Moments like the monk like chanting on the end of “Sleeping Eye Of The Watcher” and the more melodic screaming parts in “A Younger Earth” are brilliant anyway.

All in all this is another keeper. It’s going to be the number #1 spot on my year list again for sure (It might have to share that place with the upcoming new Maximum Penalty album though). Iron Age is coming over to Europe in September with Rise And Fall. Hope it’s really happening this time. I can’t wait.