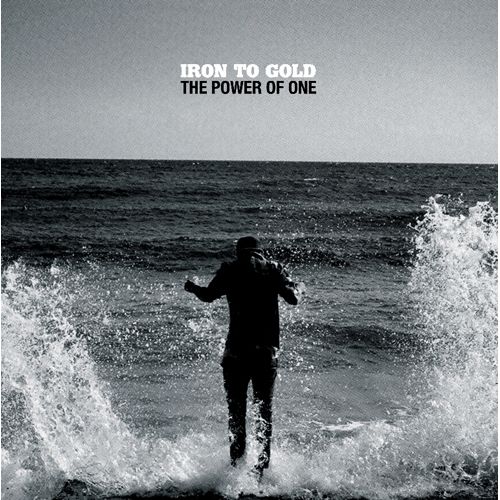 Only about 6 months later and these edge men from the far east in Europe drop another record with four new songs. First impression after one listening session: Iron To Gold managed to sound more intense and powerful… Think Judge meets early 90s Cleveland bands like Confront. So yes, this is brutal and straight forward hardcore and… with a message.

I can not think of a more “hard” way to kick off a record as Iron To Gold does with the title track “The power of one”. The overall metallic, upbeat riffing alternated by several break downs and harsh vocals on top of that give me, as an outsider, the impression that all lyrics cover (personal) situations singer Pat had to deal with in daily life. For that, think of lyrics about making the right decisions and getting the max out of life while growing up.

“Not if this world” is my favorite song on this slab of vinyl. It stands out because of the tension built in the Leeway-ish instrumental intro that proceeds in a lead role for rolling drums and a great sans-amp sounding bass guitar, up tempo part and it ends with an over the top “let’s tear this place down” mid tempo grande finale. So yeah, I guess I really dig how this song is built up. It doesn’t even bother me that this song is clocking over 3 minutes. Which I consider long for a hardcore song, keeping in mind that the best core songs ever last no longer than 1.30 minutes.

Another banger here, that’s for sure and with “Soultraveler” still fresh on my mind, the overall passion that Iron To Gold delivers will be added to the list of few new bands that I’m hooked on. Warsaw lives!