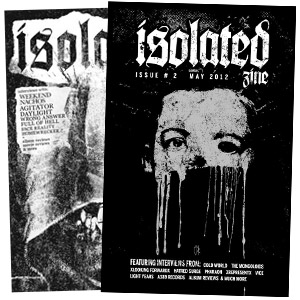 Now and then I do trades for Some Will Never Know #2. That’s how I got my hands on these two, Brian Barr out of Ohio (USA) approached me if I was interested in a trade for two issues of his Isolated zine. And you probably already guessed it… I was.

Isolated zine is half A4 in size and looks totally cut & paste. In a good way. Brian’s a designer and the zine shows it. It just looks good.

In a previous review I called Ill Blood fanzine a “snack zine”. The same could be said about Isolated. Short, but fun to read. It never gets anywhere near in-depth, not really personal either, yet I really liked flipping through these zines.

Best parts? Interview with Daylight in #1, where the singer talks about not getting Nirvana at first but loving Bush & Smashing Pumpkins (while his dad did love Nirvana). Made me feel old and confused (loving Bush, but not getting Nirvana?) at the same time haha. No worries, he wised up and now calls it a perfect band 😉 I actually need to check out Daylight (which I’ll do after finishing this review), because it says for fans of (FFO) Nirvana a.o. Most interviews have a FFO description, which I found quite useful if I didn’t knew the band yet. I also never knew that George Blacklisted was supposed to be the singer for Pegasus (love that 7″!). Would have loved to hear that. Nick (who did a great job singing on that 7″) talks about that in the Cold World interview in #2.

All in all, Isolated isn’t doing anything new, it’s not the best zine ever, but it looks good and it kept me ‘entertained’ for an hour or something. And that’s pretty good for a zine that mostly features bands I’m not even that interested in. Nice one!