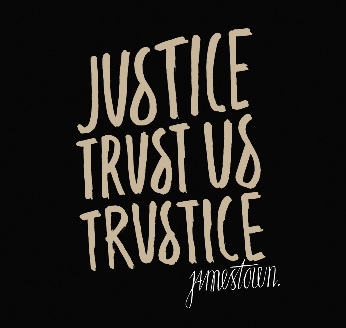 Besides the name of the first succesfully established and permanent English settlement in the USA, Jamestown is also the name of a new poppunk band from the south of Limburg. They’ve recorded four up tempo poppunk songs full of heartfelt lyrics and melodies.

The band has been released from the studio now to kick off their “Trustice” tour, ready for bright lights and late nights. In the coming weeks they will release a new song on facebook every two weeks. As a result the complete the four song EP Trustice will be online a couple of weeks. In the first song, “Into the Wild”, not everything runs smooth (the drummer isn’t locked into the rhythm at one moment) but the next one “Busstop” is just a catchy motherfucker. After two spins you already singing along to the catchy phrase “You’re the one to blame”.

The poppunk is easy to digest and the band didn’t want to invent something new in the genre, they just want to play the perfect tune such as “Go Find Yourself” is. I bet it’s easy to book a tour for Jamestown and find cute girls with lollipops in front of the stage when they are playing. This EP sounds like the starting point for a lot of shows and maybe a full length album later on?