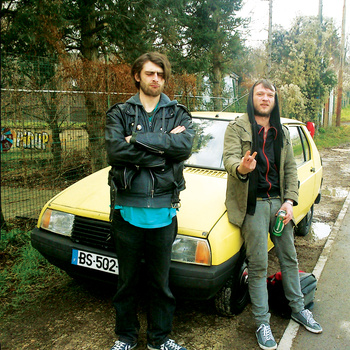 The cover of the second Jessica93 album says everything. Two young guys don’t give a fuck and are travelling around in a yellow Citroën car and see how far they can go with their DIY mentality. With respect to the second album Rise, Geoffroy Laporte has reached with that approach more than he ever expected. With a drum computer sound, effect pedals and using loops he is coming up with genius guitar melodies and melancholic vocal lines. It’s impressive how one man comes up with a sound a complete band would’ve been jealous at.

His first album was hailed by lots of people and press and brought him to several places such as Brussel and he plays at the Grauzone festival in Amsterdam at the end of January; his first show in the Netherlands. The first album was a mixture of Post-Punk, New Wave and Noise. With Rise he has shaped his sound more into the Post-Punk/New Wave direction with better and deeper melodies. “Now” is just a start up to get into the mood for some fine pieces of dark melancholic chants.

“Asylum” and “Surmatants” are great examples of the new direction. Bang your head on the moody repetitive drum computer sound, shake your hips on the slow melodies and sing along with the words “You all gonna dance with me”. “Inertia” has hope in the slow moving tunes if Laporte has stepped out of his bleak and miserable world. Would his music be his therapy for his growing up? It could be; at least he has put his heart and soul in this music just as Robert Smith did back in the days with The Cure.

At first I was disappointed because the raw edges are gone in contrary to the first album; after a few listening sessions I became aware how much better the songs are. The record evolves as one complete story with the songs in the right order to keep the flow and dynamics in a stranglehold. The melodies are stuck in your head; you will mesmerize and dream away all night long. Listen to it over and over again and conclude Jessica93 is ahead of the Post-Punk/New Wave/Shoegaze movement that is currently popular in the underground.