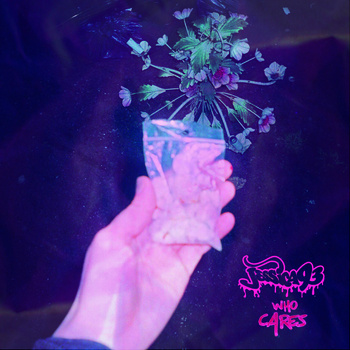 Since last year Shoegaze, Postpunk, New Wave, No Wave and whatever eighties genre you can imagine is coming back. Bands all over the world are hinting back to the sound of the eighties when Joy Division, The Cure or My Bloody Valentine were huge and made a mark on the music scene. Even in the hardcore world the influences are noticeable; SWNK already reviewed Nothing and Deaf Heaven, bands that have roots in hardcore (Nothing has connections with Horror Show and Deaf Heaven is putting out records on Deathwish Inc.). but sound as bleak as the eighties. Now we have this one man project from Paris, Jessica93.

Driving by a drum machine the sound is mechanical, cold and bleak. Below the wall of noise and melancholic vibe there are beautiful melodies to discover and mister Laporte’s voice is typical from the eighties, more exactly it has the monotone attitude of Post-Punk singers. In 2012 he released a self-titled four song LP and those songs are added to the CD version of ‘Who Cares’.  These are noisier and colder than the new songs that are even danceable. Favorite song is “Poison” that has a dance beat and the vocals even have dynamics in the range of Robert Smith from The Cure.

The special thing about the record is the slow pace of the songs that brings you in a hazy state of mind. At some moments, especially ‘Sweet Dreams’, this is sounding doomier than the average Doom Metal band on earth. The slow pounding drum machine in combination with the repeating guitar melody is feeling like a drug addict begging for money on the street. Jessica93 has written the soundtrack for the ugly side of Paris where poverty, trashy streets and a bad smelling metro system is all around.

Laporte started the project with French song titles, shifted on ‘Who Cares’ to English but still sings in French. It only adds up to the no future atmosphere of the project. In the bonus songs there are two ones with real drums but these are as monotonous as the drum machine and are the pillars for the guitar noise that’s coming out of the dull production. These four songs also have less dynamics (with the eastern guitar part in ‘Nepal’ as exception); seen as the starting point of this project it’s a good thing they are added to the CD version.

Ten songs in 75 minutes is a long ride, split them in half and you have two records that stands out on their own. I am curious if Jessica93 is achieving attention from outside France, it’s the right time and the music deserves it.