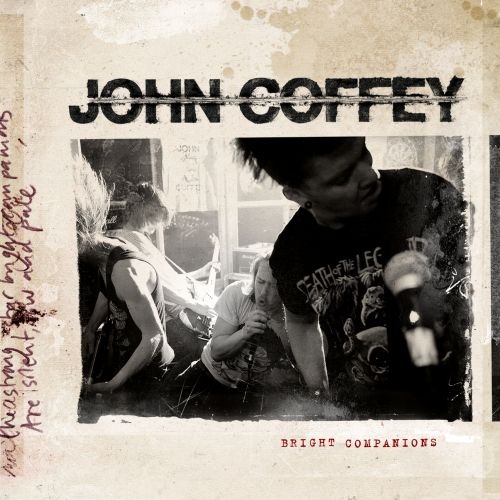 The death of John Coffey was a sad thing indeed. However, this particular John Coffey is alive and kicking, making a splendid album, which is a pleasure to listen to. ‘Bright Companions’ was produced and mixed by Pelle Gunnerfeldt in Sweden. Interesting bit about this is that the band managed to get this recording deal through crowdfunding, paying the costs for the producer known for his work with The Hives, Refused and The Ghost Of A Thousand. From that last band, Jag Jago assisted in the recording process.

So the band had  a lot to do before finishing the album, including getting two new bandmembers. David achter de Molen (previously active in various metalcore bands) became the new vocalist and Alfred van Luttikhuizen (known from Dutch radio) was the new addition on guitar. So now this intense band is ready to rock Europe again with their hectic sound, that reminds us of The Chariot and Refused. Now, I have heared so much about this band in the mean time, that I am assuming these guys must know what they are doing. The raving comments I’ve heared however, made me a little sceptic. One easily starts blaiming these on a hype or just a bunch of fanboys. This all changed however, as soon as I hit ‘play’.

Opener ‘Announce’ has an energetic feeling to it, with powerful, driven music and screamed vocals. The chorus really gets it all going with the clean vocals that give it the stadium allure but also that poppy edge the band utilises. The same goes for the track ‘Dirt & Stones’ which has some of those catchy riffs and hooks which sound rather Scandinavian. That the man who recorded the Hives must have had his say in this is beyond doubt. I also hear that Turbonegro rock’n’roll sound somewhere in here, although this is without all the sillyness.

There is no need for any illusions that this band aims to stay underground, that becomes very clear with the intro of ‘Me VS. I’, which has that vibe of popular acts like The Blackout. The polished and smooth sound that follows has little rawness left in it. Luckily singer David makes up for most of that with his fierce screams that come in right after the clippity clappity moments (you do feel tempted to clap along because the music just keeps driving you to it). What keeps surprising you on this record is the endless energy songs like ‘Featherless Redheads’ have. This is the kinda rockmusic you make when there’s no decaf late at night in the studio and you’ve already been drinking 10 cups. Combine that with the fierce sound this band is able to produce and songs like ‘I’ve Got A Bastard Virus I don’t Even Know Where It Came From’ are the intense result.

The album has so much of the catchy cliché stuff on it, lot of clapping moments, choruses you can sing along to, but it hardly matters. A song like ‘Romans’ might be bit too much on that side, it still sounds great in this collection of varied and well written songs. I just have to put it on again.