John Moreland – In The Throes 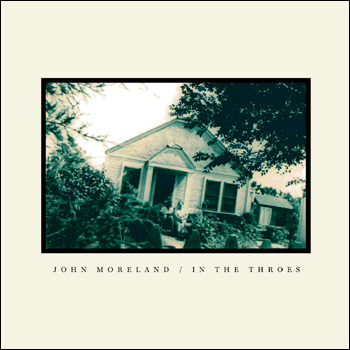 Does anyone remember The seven degrees of Stephen Egerton? His solo album for which he invited a different singer for each track? I just love that album. Even though one of the songs is about buying a Christmas gift, to me it’s one of those ultimate summer albums.

I didn’t know (and still don’t know) every singer invited for that album. One of the folks I did not know at the time was Jim Moreland (in case you’re curious: he sings “Abundance Of Fluff”). Because I liked his voice on the record I decided to check his own band out. Turned out he played punk infused with roots and Americana influences. Enjoyable, but not completely my cup of tea, so I decided to keep an eye out and see how he would progress. To my shame I must admit I totally failed and completely lost track until I heard about a new Jim Moreland album being released soon. This time without band. So, another punk-singer that’s heading down the singer-songwriter path. The last couple of years we’ve seen a lot of folks going down that road (some doing really well, some could’ve better kept to singing punk tunes), so this part of the market is becoming a bit saturated. I was a little anxious to check what John Moreland came up with, but decided to check one song out (that’s the least I could do after missing at least three albums, right?). One song turned into two, into three until I had listened the entire album on bandcamp at least four times.

You might wonder by now what got me hooked. Well, John Moreland definitely knows how to write songs! His songs maintain their character when played acoustic (as you can hear on youtube), but for this album extra color is added by adding drums, pedalsteel, bas, organ, piano where necessary. Mind you, these songs are not filled with unnecessary instrumentation, they have space to breath. What allows you to not only listen to the music but also to the lyrics, which are very personal and easy to relate to. The general mood of the songs on this album is melancholic, which is always a good thing in my opinion. Add to that a voice that reminds me of Bruce Springsteen and I’m sold to this music.

John Morelands punkroots shine through in the DIY approach to this album. He produced, engineered and mixed it himself and played (almost) all instruments himself. In one of his songs (“Your Spell”) he sings he is ‘King of the ignored’. Let’s hope this album changes that status, as this album is most definitely worth your time! And I’ll be looking into his earlier albums too, just to check what great songs I’ve missed so far.