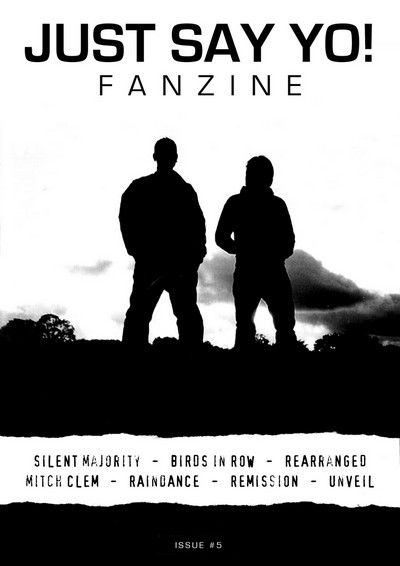 Nab, ‘our’ Nab, is back with a new issue of his Just Say Yo! (JSY!) fanzine. As you might have read in the short Q&A I did with him recently, in our ‘Meet The SWNK Crew’ series, his fanzine was one of the reasons I asked him to join SWNK. So far I loved every issue he did, and I’m not expecting issue #5 to be any different.

What do I look for in a good zine? I love zines that make you think, make you want to react. JSY! (after the introduction pages) starts with some columns, and the first column already made me want to look for a reply button. Which is kinda silly for a zine I know, but I’m just trying to say I wanted to react to the piece (a comparison between opensource (software) and the hardcore scene) right away. While the author had some good points I didn’t agree with everything. And I wanted to tell him/her (I’m not sure if Eloriah is a guy or a girl’s name). Nab also writes a column, partly about death. Which is something that scares me to death (uhuh…). He talks about the fear of losing people close to you, which is something we can all relate to. So the ‘makes you think / makes you react’ box is ticked. What’s next?

I also like to read about bands that are pretty much unknown to me. If it makes me want to check out that band, even better. Any of this in Just Say Yo! #5? Of course. Silent Majority for instance. While I’ve seen the name mentioned here and there, I never checked them out yet. The article in this zine finally made me listen to their stuff, and of course they’re great. There’s also an article in there about the bands that Mike Kirsch (now Sarah Kirsch) played in. I love Fuel, so I’m going to check out those other bands too. Almost like checking out thanks lists to find out about new bands right? Either way, another box ticked.

I love zines that give you the feeling you did get to know the bands / persons a bit better after finishing it. The interviews are in-depth enough and not too long to get boring. So that’s another check. It’s always a big plus if a zine is fun to read. Stuff like the Raindance tour promotion video (using the scene of “Der Untergang” / “The Downfall”), the interview with his friends in Unveil, the interview with Mitch Clem (Nothing Nice To Say comic) etc. JSY! also scores in the lay-out department. Computerized cut & paste style (in a good way) and easy to read.

There are also reviews in there, but I usually don’t give a shit about those (he said while typing up this review… – Mine suck too). And these are no exception. Not that they are bad, I just don’t care about them. Sorry Nab. I had to include something negative too right? Otherwise people would think you bought me off. For the next zine review I would prefer a black sportscar though, red’s not really my style.

All in all, I think Nab, got pretty much all bases covered in this zine. So be a good boy/girl and pick up your own copy. When’s issue #6 coming out?

Just Say Yo! fanzine issue #5 is a 68 page A4 sized zine featuring interviews with Rearranged, Unveil, Raindance, Birds In Row, Mitch Clem. A U.S. tour report with Remission. A Silent Majority retrospective, a Mike Hartsfield VS Mike Kirsch discography article and a NY punk mixtape (Worms In The Big Apple).