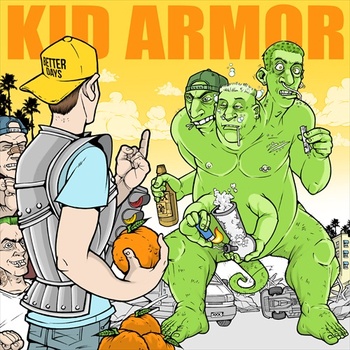 Pissed of, fast straight edge bands have been on the rise in recent years. Bands like Coke Bust and Sectarian Violence spreading the drug free lifestyle while also focusing on social-political issues. Musically and lyrically California’s Kid Armor is on the opposite side of the straight edge genre. They’re playing straight up youth crew hardcore with some Adolescents and other California punk sounds thrown in for good measure. Vocalist Shea has the right kind of burly voice for this style and at times reminds me a bit of Issa of Good Clean Fun.

The artwork for this 7″ was done by Javi who has been working on many of the latest Commitment releases. Thought it’s kind of cool to have one artist do so much artwork for one label, there’s also the downside that to me the artwork is a part of the image of the band. When all the bands are using the same artist who has a very distinctive style I get the feeling that the band is giving up part of their identity for a collective good. My son however loves the drawing of a straight edge kid in armor throwing oranges towards a three headed hulk who drinks, smokes cigarettes and a water pipe.

Most of the songs of Kid Armor deal with saying no to drugs, selling out on straight edge and the heavy use of medication by people today. Great topics if you ask me to sing about if you’re doing a youth crew band.

Kid Armor will not be storming onto the bigger hardcore scene with this 7″, but if you’re into well executed youth crew hardcore and in need of positive breath of air after all the negative pissed of sounding bands, these Californian boys sure come in handy.