Kill the Curse – Of Conformity and Death 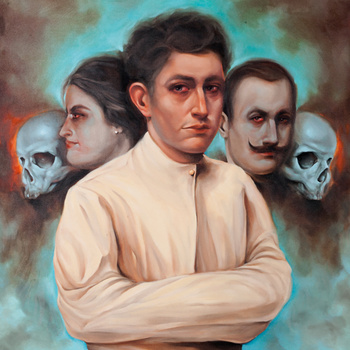 When I look to the drawing on the front cover of Kill the Curse’s record I see three people from the middle Ages drawn together with two skulls. The atmosphere is similar to the artwork of …And You’ll Know Us by the Trail of Dead, the music on Of Conformity And Death is not. Not even close to what the band from Texas plays.

What we get is eight songs in the vein of old Terror (the metallic side) and later Earth Crisis topped off with the typical Finnish hardcore style and dialect of the singer. Maybe you know him (Kalle Pennanen) from his old band Security Threat. His friend Miikka wrote the eight songs of Kill the Curse and the rhythm section consist of Lauri Louekari (Bolt) and Tapio Vartiainer,

The four veterans of the Finnish veterans couldn’t prevent the album from somewhat lacking in anger. The hooks are pretty great;  the melody that shines through the, mostly mid-tempo, music is keeping your attention. Kalle’s vocals are pretty monotone and although the album only has eight songs and clocks in around twenty minutes it wouldn’t last longer. The production is pretty sterile and some roughness (the guitar sound is adjusted in the higher regions unfortunately) wouldn’t have hurt the songs.

The begin riff of “The Stench of Fear” is the best one of the record (including the solo at the end) and the song can keep up with Terror’s midtempo’s songs. Closing off with “Escaping the Desert” the melody in the guitar sound brings it to a positive end,  together with the chugga chugga end and spoken word sample.

All in all Of Conformity and Death gives me mixed feelings but when you are a fan of Finnish Hardcore or the Full House releases you won’t be disappointed by Kill the Curse.