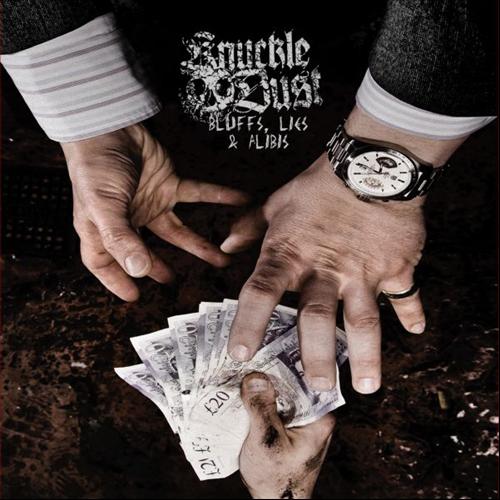 I’ll be the first to claim that hardcore is dead in times of generic drivel and other Bruno the Bear sings to you bands. On the other hand you will see or hear me tell you that the corpse is ressurected and things are better than ever. At this moment we have a serious asskicking corpse called hardcore with releases that are superb  The only thing that can hold whining farts like me back is that I tend to wallow in nostalgia. But if I follow one of hardcore’s most important dogma’s I keep an open mind and enjoy the music for what it’s worth.

Knuckledust always was one of my favorite UK bands. Where most bands have a Chihuahua on vocals that act like a bulldog. On vocals Pierre sounded like a stark raving mad pitbull with some serious scores to settle. The vocals remain one of the keyfactors for a band to me. And when the vocals suck the music has to be better than good. Knuckledust always delivered the goods on that front too. So how does this London based outfit fare after their last full length five years ago?

‘Bluffs, Lies & Alibis’ manages to update the already well defined sound and adds more depth. This results in better songs that hold their own against the already impressive list of live favorites. This album must have been written with the liveshows in mind. This never hinders the listener at all. Because in the past we have seen that making a record that sounds as live as possible falls flat and most of the times sounds rather dead. Even if you never get the chance to see the best band of the LBU scene live you still can marvel at their energy. They sound tight, focused and in your face.

As with recent offerings of bands like Backfire!, No Turning Back and New Morality it is more than clear that Europe again is in the lead when it comes to hardcore. Although the New York vibe is ever present the bands offer their own take and add their own flavor. In the case of Knuckledust it are again Pierre’s vocals that sound like he wants to bite your head off through your speakers. The only difference is that even better than before the lyrics are understandable and this urges you to sing along. Even the untrained ear can hear that there is a lot wrong with the world. While offering a perspective instead of only stating that there is a problem the band shows concern for the future without sinking into depression or despair.

All in all there is actually no reason why you shouldn’t order your copy today. If the above mentioned bands are your cup of tea this is a guaranteed classic for you. If you still frown upon everything that might be called ‘eurocore’ this album might convince you otherwise.

Hardcore is back alive and has a lot more quality to offer. And I might not go into pits anymore, grown more lay and fatter than before, ‘Bluffs, Lies & Alibis’ makes me want to get up and get active again.