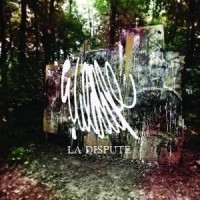 If you are of the opinion that La Dispute, just like Touche Amore, are this year’s equivalent of girlfriend hardcore please read no further. However if you still consider yourself to have an open mind you might check out what I think of La Dispute’s new record.

At The Drive-In was a band that reached an audience outside of the underground scene very soon and then blew up. Why I bring up At The Drive-In? Well because La Dispute at times reminds me of that band especially record opener A Departure. But where La Dispute first effort Somewhere at the Bottom of the River Between Vega and Altair musically was a weird but working mix of At The Drive-In and Mewithoutyou, Wildlife is a record with a much more varied musical offering. Though still melodic and relying on singer Jordan Dreyer’s unique and to some ‘whiny’ voice Wildlife  is rich of musical adventures.

What really grabs me the most however are the lyrics. For a large part Wildlife is a collection of tales. Stories Dreyer probably picked up while on the road. Where most bands who’ve been touring a lot come with a record full of united kids, and desolate roads, Dreyer tells more human tales.

For example I See Everything tells the story of a child who dies from cancer and how a family tries to cope with the death while keeping their faith in God. And though I don’t believe in God at all, being a parent myself this song really hits close to the heart. King Park describes the aftermath of a shooting where a young boy is killed.  The lyrics go on to tell how the shooter holds himself up in a hotel, threatening to end his life and questioning if he still can get in heaven if he does pursue.

And that’s not the end of the drama on Wildlife as it’s best track Edward Benz, 27 Times reveals a true story of a father, Dreyer actually met, whose mentally-ill son nearly kills him.

Where Touche Amore’s Parting The  Sea Between Brightness And Me was a bit dissapointing both musically and lyrically, La Dispute really have put a lot of effort in a record that shows a matureness for which the label girlfriend hardcore just isn’t enough. Chance are this band, just like At The Drive-In, will reach an audience outside of the hardcore scene soon. Let’s hope that unlike At The Drive-In, La Dispute manages to keep things together and not end up as some weird sixties jam band.