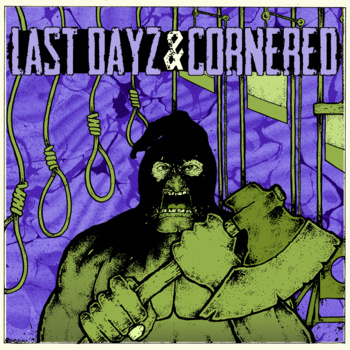 Two bands, two nationalities and both heavily down with hardcore. The zine added to this release by Ratel Records is pretty clear on this topic and how they view hardcore these days. Last Dayz from Wroclaw, Poland and Cornered from Leeuwarden, Netherlands, toured together for a couple of shows and now release a cool split.

The artwork is done nicely, but this record has a message attached to it and that’s about making hardcore and making a scene alive. It’s not about having the new, fancy Trapped Under Ice shirt, but the real deal according to added literature. I think that says it all for both bands on this record.

Last Dayz has two songs on this record that sound hard hitting and tough. An occasional metal guitar riff flies through ‘The Reason’. The vocals have come to the forefront in the mix of the song. The band reminds you a bit of Providence, Dead End Tragedy and Fallbrawl. Heavy pounding, slow paced is ‘The Last Believer’, which almost sounds like a laid back song.

The other side is of course reserved for Cornered. Much more energetic and agressive the song ‘My Own Enemy’ comes out of the speakers. With a groovy intro of almost 1.30 min, the song is short and intense (lasting only 2.39). Much more like Backtrack and the likes, songs like ‘Alone’ feel energetic and powerful.

All in all, a nice split with two different sounding bands.