Length of Time – Let The World With The Sun Go Down 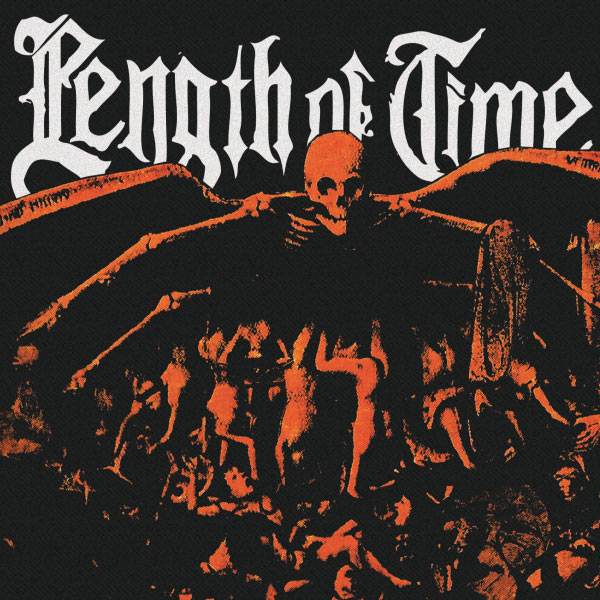 Without a doubt, Length of Time is one of my favorite hardcore related bands from the ’90s. I think it was at a Deviate / Right Direction show somewhere in 1997 when a merchguy handed me the We Choose The Violent Way demo tape, ordering me to buy it. When I asked what this band sounded like, his answer was clear and simple: “Sick!” He was completely right. As soon as I heard the opening riff of Touched By Death I was hooked by Length of Time’s evil and bone chilling sound.

Fast-forward about 15 years. Besides a few live shows and a split 7″ with a band called Santa Karla in 2009 (which at the time, I failed to track down), we haven’t heard a lot from Length of Time in the last decade. Approach To The New World and Shame To This Weakness Modern World are classic releases by now, but after the disappointing How Good This World Could Be, Again and it’s more experimental, not too well received 2002 follow-up Anti-World, things went quiet. To be honest, I had given up hope for a new Length of Time release, but now the band is back with a few line up changes, a fresh deal with GSR Music and, most importantly, five newly recorded tracks. Will they be able to relive their glory days?

Well, fans of the earlier releases could be a bit underwhelmed at first. This bears almost no resemblance to the crushing, grooving, mid-tempo metalcore of hits like Shorttimer or Straight To Hell. The sound has become a lot more straight up thrash metal; Misery and Confusion and War Martyrised World could easily have been on any recent Slayer album. The experiments of Anti-World mainly return in Grounded In Lies, after the listener has been pounded into submission by the banging opening track Until The Blast. Maleficious World, with it’s direct lyrical links to LOT-classic Thoughts Of The Enslaved, is definitely one of the best tracks the band has ever released. Especially the dragging middle part (that somewhat reminds me of Belgian groove masters Channel Zero) is brilliant.  Rosse’s vocals are still as gut-wrenching as ever and the production of this EP hits you like a ten ton hammer.

Length of Time has always been a band with a changing sound and I must say I’m impressed with this new incarnation, so I’m eager to hear what these songs sound like live. And of course to sing along to Thoughts Of The Enslaved again. DEMOOOOONS…DEMOOOOOONS…

GSR Music has released Let The World With The Sun Go Down as a six track cd, with the song ‘Death Retreat’ of the split 7″ with Santa Karla as a bonus track. There also is a limited edition vinyl picture disc, that has the entire remastered 7-track demo as a bonus. Last but not least, for all you old school obscurists out there, Tanquam Aegri Somnia did a hand numbered run of 150 audio cassettes, also featuring a 23 minute ambient / minimalist / neofolk track recorded by LOT guitarist Kirby more than 15 years ago.