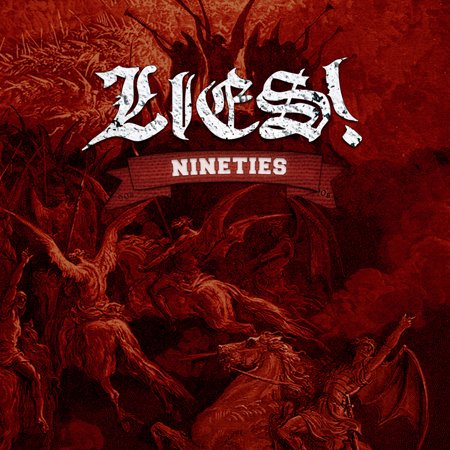 Remember when metalcore was actually played by hardcore kids instead of gender confused, neon clad, girl’s jeans wearing, throat tattooed, Vulcan haired, wide earlobed children? Remember when bands were still concerned with more musically then connecting the clean-vocals-bridge with the next brööötal breakdown and the ‘core’ part of the term actually held significance?

So here’s Lies! from Groningen, The Netherlands, a band that wears its influences proudly on its sleeve. If an album title like ‘Nineties’ doesn’t tell you what this is all about, the damaged gothic lettering, Doré artwork, an intro with some dude quoting some apocalyptic shit from Revelations and movie samples from End of Days, se7en and The Devil’s Advocate (“God? Let me give you a little inside information about God!”) surely will. Fortunately, the music completely fits this vintage packaging. Just listen to a song like ‘Written in Blood’: a total All Out War-worship intro crashing into a relentless double bass Merauder groove, only to step it up with a bit of up-tempo early Hatebreed. Awesome.

‘When push comes to shove’ reminds me of ‘All Bets Are Off’-era Backfire! and you’ll probably hear some Biohazard or any other nineties band you can think of in the mix somewhere. The gritty vocals and rough but balanced production (Jamie Locke-style) are the icing on the cake. If this was 1997, Goodlife or IScream would have been all over Lies!.

My only complaint is that the band perhaps relies on that Merauder-groove a little too much. A bit more variation and tempo changes would have been welcome between all the Slayer-esque riffing, but with 7 tracks in under 18 minutes, it’s hard to get bored. The band needs to watch out the whole Nineties angle does not become too much of a gimmick and will probably have to bring a little more than just an homage on a future release. That being said, strap on your Eastpack, sport your visor and sleepingbag-winterjacket and mosh it up skatemove-style!

This e.p. can be downloaded for free from http://www.lieshc.com. A smart move, but the band could have done better here, in my honest opinion. In my download package I got no artwork, no lyrics sheet and 128 kbps mp3’s. That’s just not enough these days, with high quality sharing possibilities like Bandcamp only a few clicks away.

On the other hand, I guess it doesn’t get more nineties than 128 kbps mp3’s.  At least it’s not Realplayer…