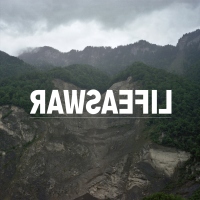 I rarely consider the looks of a record as something very important, just more like something that has to catch the vibe of the sound. The high quality of the new Life As War release, L’humilité ou la mort, deserves some credit for that however. The album is released on a shine through piece of vinyl . The cover has beautiful artwork and doesn’t look like a small production at all, which it is.

The band hails from Switzerland, and therefor the lyrics are in French and German.  The band sounds a bit like Sick Of It All, Shattered Realm and Down To Nothing. Oldschool brutal and muscular sounding hardcore the way you like it, making French sound much less ‘amour’. The members played in bands like Driven By Hate, Strength Of Despair and Dawn Of Suffering before. Experience a plenty in the scene of Suisse.

‘Elogie De La Modernité’ kicks the record of after a slow introduction full of squealing guitars pushing feedback out of the amps. Slowly but surely the band builds up to an explosion, for which they take until halfway the song. The second song is called ‘Durch Dunkelheit Zum Licht’ (Through darkness towards light). German was chosen because one of the members feels close to this language, the others feel comfortable with French. The song is a driven, energetic burst of aggression and despair. This is something the whole album seems to convey, a nihilistic view of society and the way we regard our lives.

In that sense the lyrics are very poetic for those who appreciate them, ‘L’humilité ou la mort’ is one of those songs, with heavy breaks and rapidly spat out vocals, totally working for a hardcore 2 step moment during the live performance. There’s a clear atmospheric and melodic vibe to the sound of this interesting band. Rhythm is something this band definitely has, which is clear on songs like ‘La Fin Du Monde’ and ‘Nihilists par défaut’. The band sounds surprisingly positive and upbeat at times, which is a bit out of step with their general message.

That melodic and atmospheric vibe comes out pretty nicely when they kick into the ‘Interlude’, which could just as well be on some post-metal record. It seems like from here on the band gets a bit angrier and pushes the pedal a bit further down on ‘Partout le néant’. ‘L’Aubaine de l’effroi’  has that elongated screaming, which sounds full of despair and rage that comes from the screaming out ones longs style of vocalist Silvio.

‘L’assujettissement par la Liberté’ is in my humble opinion the best song of the album. It demonstrates power and passion with fast, pummeling rhythms  vocals full of fire and that atmospheric backdrop that makes the band have something distinctly bleak. A sound that ‘L’horizon de la violence du monde’ wraps up in what sounds like a lethargic epitaph for society. Brilliant record, this is something else by Life As War. I would gladly recommend this band to anyone. .

You can purchase the record here, or download it for free here.