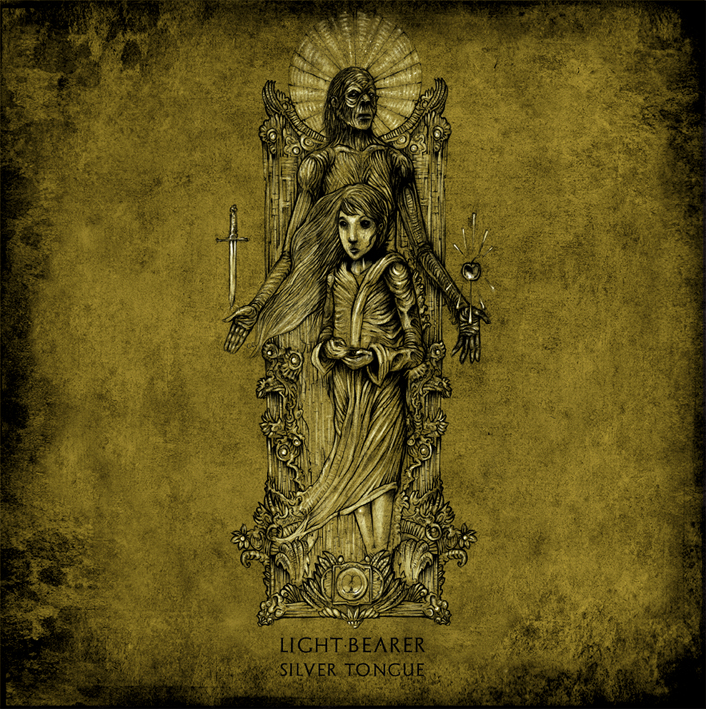 Light Bearer stepped to the forefront of the alternative / post metal scene with their debut ‘Lapsus’. They consolidated this position with the 21+ minute track on the split with Northless and the new album ‘Silver Tongue’ is once again a killer album that lasts for almost 80 minutes. And that’s far from too long; instead the record is over before you notice.

The new album marks the second act of altogether four acts that tell a metaphorical story about the dawn of enlightenment, based upon a number of interpretations of the Judea Christian version of the casting out of Lucifer and the fall of man from The Book of Genesis. The story is an intrinsic part of the mythological narrative of humanity, the subjective concept of good and evil.

The first song ‘Beauty is this Burden’ is balancing on this last concept. As always the band takes the time. An ambient buzz is increasing in volume when the first guitar melody is starting. Later the wall of sound is kicking in. This recipe is returning again, every part at the perfect moment. A lot of bands just miss this feeling of timing. Light Bearer does not and aside from that, Alex CF has the perfect scream for this genre. He spreads out his vocal lines on the right moments.

“Matriarch” is the ‘good’ song on this record, with beautiful cello parts woven into the post rock. In “Aggressor & Usurper” the band is vicious to the bone. Elements of chaos and brutality are spread out in this post metal song. The screams are the most intense on the record and it’s simply the best song. It’s also well placed, after the quiet intermezzo “Clarus”. Most of all I really love the crushing riffs together with the battling drums.

The last one “Silver Tongue” starts completely different. The positive opening riff is motivating and defines hope for a better and positive world. The song even turns into a nineties metalcore song for a small bit if you look at the riff and breakdown parts of the drums. Around ten minutes the glorious path is continued with brotherly community singing (“ahhhh”) behind the main screams of Alex CF. Only vocals and a violin form the bridge for the end of the record. The climax once again has that brother love feeling. I can’t help it but it gave me a Manowar anthem idea, reconstructed as an alternative metal ending.

Light Bearer simply created breath taking new songs, combining old structures and revealing new elements. They show to be one of the best post metal bands from this earth. If you ask me they can be put in the same range as Neurosis, Cult of Luna, Isis and Amen Ra.