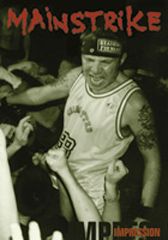 Too bad this didn’t come out BEFORE the reunion show at Light The Fuse fest since it’s the perfect way to get into Mainstrike again for that show. I wasn’t around when Mainstrike was big but “Impression” does a great job at taking you back to those days.

It’s packed with lots of stuff: from a song of the first show (in the extras, together with other songs from seperate shows) to the final show, in between you’ll get the ’99 Ieper show, a great US tourreport, a flyer/photo gallery and an interview with Bigma. It’s all there. The sound’s good, especially for an audience recording. I really like how you can hear the crowd singing along, something a recording straight from the mixing desk would lack. The video (multi-angle edited) is also good, don’t expect crystal clear images though, but what can you expect, those shows weren’t recorded with professional cameras. The layout is simple but good too. I just can’t find anything negative. Oh wait, they listed “Jef Smits” twice in the credits on the layout. I’m glad I found something!

While watching this DVD I tried to compare Mainstrike to a band that’s around now but I realised we really miss a band like Mainstrike in the scene nowadays: good solid hardcore with a message, with a frontman that says powerful and meaningful things on stage… Most bands have the first but lack the latter. Hope we’ll see some change in that in the (near) future.

Well, I can keep talking about this DVD but just trust me on this one, “We Were History Productions” did it again, I think this one is even better than the Reaching Forward DVD. I’ll rate this 4,5 stars because it isn’t perfect (what is?) but it comes damn, damn close. MUST HAVE.