Make Do And Mend – Everything You Ever Loved 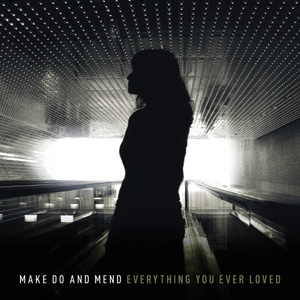 I must admit, I have a notoriously bad relationship with the so called ‘follow up record’. If a band has released a record that I love (and I mean REALLY love), it’s going to be extremely hard for them to convince me with their next album. I will as a rule not love it and probably not even like it the first three spins. I think the last time I instantly liked a follow up record was when Hatebreed’s Perseverance was released, but that was when I was 12 years younger and still qualified record’s with statements like ‘holy crap dude, this shit is bruuutal as fuck!’. Normally, I give every band I love the benefit of the doubt and listen to their new record extensively. Sometimes they grow on me and I learn to love them as much as the album before it (He Is Legend’s Suck Out The Poison and Off With Their Heads’ In Desolation, for example), sometimes they will continue to leave me completely cold (Nothington’s Borrowed Time and Cobra Skull’s Agitations) and sometimes I learn to like them for what they are, even though they are not nearly as good as their predecessor (Far’s At Night We Live).

So here we have Make Do And Mend’s new full length. I love End Measured Mile. To death. I love it so much that I told front man James Carrol after their show with Hot Water Music in 013 Tilburg that his music had been (and I quote) ‘the soundtrack to my life for over a year’. Which is an enormously dorky and fanboy-y thing to say (and I could tell by the look on his face that he thought so as well), but that’s how much I love that record. Needless to say, I was both excited and anxious when Everything You Ever Loved was announced. I could hardly believe that this band would ever disappoint me, but that was until I heard their acoustic e.p. Part & Parcel. Not my cup of tea at all. And then single ‘Lucky’ was released. I hated it at first, for reasons I truly cannot recall now. Two days later I found myself humming the song in the shower and after a week I couldn’t stop listening to it. And then Disassemble was released, which I also did not like, but it grew on me. A little. I thought Lucky and Disassemble would be the more polished ‘commercial’ (for lack of a better word) songs and that the rest of the album would be more vintage Make Do And Mend. I was quite wrong.

That was kind of a lengthy introduction to a review, but you need to understand where I am coming from here. After about 15 listens (normally my personal breaking point for yay-ing or nay-ing a record), I’m still a bit torn. I love the first 4 songs, including Disassemble. All be it more polished, this is the Make Do And Mend I want to hear. Rocking, a slight Hot Water Music-vibe but with a twist, James’gruff but melodic vocals, great lyrics (‘One day who I am and what I lack won’t be the same thing’ from Count are simply the best I’ve heard this year). And even though St. Anne is by far one of the softest song on this album, the lyrics and vibe have literally brought me to tears (probably because my daughter’s name is Anne and I could apply vital parts of the lyrics directly on her, even though the song is about something else).

But after that, my attention starts to fade. Looking at the track list right now, I honestly couldn’t hum any of the songs on the second half of Everything You Ever Loved. With the exception of Lucky, which now proves to be the stand out song, even so much that it almost feels like it does not fit in with the rest of the record. The other songs become too ‘clean’, so to speak. The rough edge is, not so much gone, but more of an undercurrent. The songs don’t stir my emotions like the band’s previous work did. The lyrics don’t hit home as much. I read another review that stated the ‘new’ sound is somewhere between Jimmy Eat World and Foo Fighters. There’s a lot of truth to that, even though that Hot Water Music reference is still relevant.

So do I think this is a bad record? Not by a long shot. Make Do And Mend definitely grew as band, they just grew in a direction that I find hard to digest. If songs like Disassemble or Stay In The Sun would be picked up by the right radio stations, I see this band headlining big shows and playing huge festivals in no time. This is no longer the band that was ‘just stoked to play your basement’, this band wants and deserves bigger things. There will be a lot of people who will love the living shit out of Everything You Ever Loved, both old fans and new. And I really wanted to be one of them. But after a while, listening to this record to me began feeling like a chore. So I stopped listening. Perhaps it will grow on me in time if I can get myself to revisit is. For now, I’m more indifferent than disappointed.