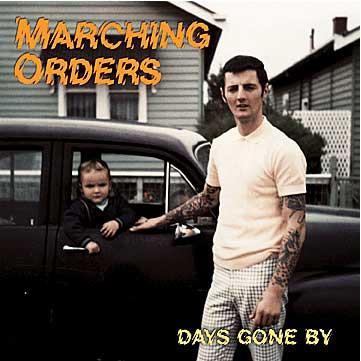 Ah Australia. Land of Bruce, Bruce and Bruce. If you don’t get that reference I guess you never saw Monty Python. You should check that out as soon as you can. Just like you should check out Marching Orders.

When it comes to the former prison colony you have to agree that some of the most direct and straight forward things come from that continent. Wheter it’s Mad Max or AC/DC and Rose Tattoo it’s always clear that you either like it, or not. I happen to be a fan of bands that claim to be Aussies  Marching Orders is a band that has this added flavor of brashness and straight forwardness that I like. Not entirely unlike the legendary Anti Heroes when it comes to variety and honesty the band from Melbourne knows their heritage and what is needed to write an album with songs that stick in your head for days. This isn’t a pure oi or street punk album per se. It has a rock and roll undercurrent that makes this a band you can introduce to your friends as a band that might get them into the more pure stuff.

The highlight are Al’s vocals and his lyrics. They offer a whole different approach and seem to be more introvert at the core. There are some songs that you can sing along to halfway through the song itself. While the album starts out pretty straight forward there is enough to discover along the way. The band explores every niche of the genre without sounding like a copy of another band. And again it’s to Al’s credit that his raw vocals and accent function as a guideline.

I simply can recommend this album to anyone that has an interest in punk, oi or hardcore.