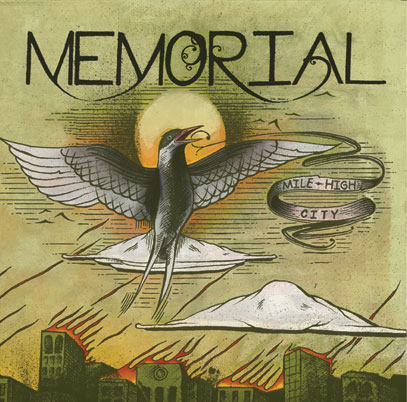 Hostage Calm’s s/t album was in my opinion one of the most underrated records of 2010. Which brought me on a relentless crusade for the first half of this year to bring that record to everyone’s attention. Since I have different things planned for the first part of 2012 I thought I take the opportunity right now to let you in on what I think is the most underrated record of 2011: Mile High City by Memorial.

The band, which most well known member is Peter Appleby of Count Me Out, brings you post-hardcore in the vein of early Rival Schools, a bit of Quicksand but most notably Jupiter/Tides Of Tomorrow-era Cave In. If that kind of alternative and spacey stuff is your thing, Memorial is definitely a band you might want to check out. Especially on Jar Like Flies and Beyond the Beyonds the band does their very best to keep up with Cave In and succeeds in doing so.

Though released a couple of months ago, these tracks were already recorded in March 2010. Which makes me curious of when new Memorial songs will be released and how far the band has expanded their sound by then.